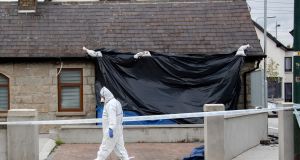 The dead man is understood to have lived alone at the house on Bluebell Avenue where he died and was receiving assistance from homeless services. Photograph: Colin Keegan/Collins

Further postmortem examinations are required before it can be established how a man found dead at the scene of a house fire met his death.

Alan Hall (45) was found dead at a property in Bluebell, west Dublin, on Monday which had been extensively damaged by smoke due to a fire.

The initial postmortem carried out on his remains found he had a number of injuries which may have resulted from an assault, though the precise cause of his head injuries could not be determined.

Gardaí are awaiting the results of toxicology tests and further postmortem checks on the Dubliner’s remains in a bid to pinpoint the cause of death, which was being treated as suspicious but has not been ungraded to murder.

It was not clear when a precise cause of death would be established. The possibility Mr Hall was assaulted and that his injuries caused or contributed to his death has not been discounted.

Gardaí based in Clondalkin station have issued an appeal for assistance from members of the public, including those who knew Mr Hall.

The dead man is understood to have lived alone at the house on Bluebell Avenue where he died and was receiving assistance from homeless services.

Mr Hall is understood to have previously worked as a butcher and while he was known to gardaí he was not a serious criminal and he had not come to the attention of the Garda for some time.

He returned to the house at some stage on Sunday but his body was only discovered the following morning after neighbours were alerted by the fire alarm.

He appealed to anybody who was in the vicinity of Bluebell Avenue or the Old Naas Road, Dublin 12, on either the evening of Sunday May 17th or the morning of Monday May 18th to contact the Garda.

Initially it appeared that Mr Hall did not live at the address where his body was found dead, but it has since been established that he did. Gardaí have conducted searches of the area around a nearby canal and have examined the remains of a burnt-out mattress found at the scene.