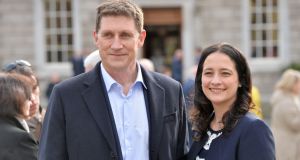 Eamon Ryan and Catherine Martin: Martin was against coalition talks with Fianna Fáil and Fine Gael, so some wonder if her anticipated run against Ryan is a way to disrupt those negotiations

Admissions of being stumped by a turn of political events are not something you hear regularly around Leinster House.

Politicians and observers usually confidently bluff or sagely predict what will follow the latest decision by a Minister or TD. Some will then remind you forever of their accurate predictions while conveniently forgetting their howlers.

But Catherine Martin’s indication that she will run against Eamon Ryan for the leadership of the Greens was one of those rare moments that left even the bluffers nonplussed, especially on the effect it will have on the current efforts to form a government.

Martin was against coalition talks with Fianna Fáil and Fine Gael, so some wondered if her anticipated run against Ryan – not expected to be announced until coalition talks are concluded – is a way to disrupt those negotiations.

Yet the Dublin Rathdown TD is leading the Green negotiations in those talks and has, according to sources, played a constructive role.

Others wondered if she and Ryan could both sign off on a deal with Fianna Fáil and Fine Gael, sell it to Green members in a ballot and then – just weeks later in the leadership contest – Martin could promote herself as the leader who will firmly keep Leo Varadkar and Micheál Martin to their promises.

Could this bring a worried membership onside, with Ryan’s position sacrificed to secure the deal?

But the bargaining done between leaders – what Varadkar, Ryan and Martin talk about directly to each other, such as during the clear-the-air session between the three last Monday – is done on the basis that each can deliver on what they have promised.

Ryan’s authority has been seriously damaged by events of the last 24 hours. What value can Micheál Martin and Varadkar put on his promises now, and what do Fine Gael and Fianna Fáil think when they see those urging Catherine Martin to stand claiming she won’t be afraid to “pull the plug” on a government if needed?

Against all those unanswered questions perhaps there is a simpler consideration at play, with all the associated difficulties left for another day or for someone else to worry about.

Perhaps Martin realises that if she does not seize this opportunity to fulfil an ambition the opportunity may never arise again.

Ruthless it may be, but it is at least understandable to all those who practise politics.