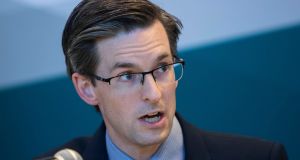 Dr Ronan Glynn, deputy chief medical Officer, Department of Health, said anyone attending a meeting and treated as a close contact, where a positive test was recorded, would have to self-isolate for 14 days. Photograph: Colin Keegan/Collins Dublin

There is nothing preventing businesses from having the same people in the same room for a meeting for over two hours, deputy chief medical officer Dr Ronan Glynn has said.

However, employers needed to balance the work they are doing with the fact that someone, if they attend a meeting for over two hours with another person, could be regarded as a close contact if that person tested positive.

In those circumstances, anyone attending the meeting and treated as a close contact would have to self-isolate for 14 days.

“Everything we do is a balance between risk and benefit,” Dr Glynn said, adding that the guidance on what constitutes close contact with a case was in place before any restrictions were put in place.

Dr Glynn was speaking at the National Public Health Emergency Team (NPHET) briefing on Wednesday evening after Ireland’s judges announced they were limiting all physical court sittings to no more than two hours to help prevent the spread of the coronavirus.

The decision was made arising from health advice given on Tuesday to the Houses of the Oireachtas concerning persons who may be in the same room, even though practising social distancing, for more than two hours.

Dr Glynn, who was deputising for chief medical officer Dr Tony Holohan at the NPHET briefing, said he was not privy to the advice given by public health officials to the Oireachtas on the conduct of its meetings.

From this week, anyone who is a close contact of a confirmed case will be tested, he said.

Meanwhile, a number of politicians who sit on the Dáil’s business committee have expressed concern about the implications of the two-hour limit in Leinster House.

One source said that the advice the Oireachtas received represented a “logistical nightmare” and although alternative plans were under consideration in relation to how committees and the Dáil may sit, given that advice, there was no immediate clear cut solution.

The matter is due to be considered by the committee next Tuesday.

The Oireachtas had sought advice in advance of the first witnesses appearing on Tuesday before the Dáil’s new committee on the response to the Covid-19 pandemic.

Documentation circulated amongst members of the Oireachtas business committee stated that a number of the witnesses were “unwilling to attend together for more than one two-hour session”.

The document said that some of the witnesses “communicated orally to the Clerk to the Committee” that “it was a breach of the guidelines to have witnesses together for more than two hours, notwithstanding the fact that their locations would change” between sessions.

Further advice was sought from consultant microbiologist Prof Martin Cormican. In written correspondence to the Oireachtas, he said that “if a person at one of the hearings develops Covid-19 in the two days after the hearing they attended and if the hearing lasted for two hours or for more then everyone else who was in the room for that two hour period will be designated a Covid contact and will be advised to self-isolate for 14 days”.

He wrote: “There little reason to believe that 1 hour and 55 minutes of exposure is materially safer that 2 hours and five minutes of exposure however if it is intended to put a time limit on the hearing as a technical measure to avoid the possible consequence of people being designated contacts then it will be necessary to have the people leave the room before 2 hours have elapsed and not at 2 hours and it will be necessary that they do not reassemble on that same day.”

On Wednesday morning, Mr Justice Peter Kelly, president of the High Court, read a statement in court, on behalf of the Chief Justice and presidents of all the courts, arising from what had happened in the Houses of the Oireachtas.

It stated the Courts Service was unaware, until the matter became public on Tuesday, “of what appears to be additional safety considerations beyond those already published”.

The Courts Service has sought further urgent advice on this matter as it clearly has the potential to affect the conduct of court hearings or sessions likely to involve judges and registrars, together with others, being in a courtroom for more than two hours in a day, the statement said.

Pending receipt of that advice, the court presidents have determined that all court sittings will last for no more than two hours a day, it was stated.

The director general of the Law Society, Ken Murphy, described the move as “bordering on bizarre”, adding: “The question has to be asked if there has been some miscommunication and overreaction here.”