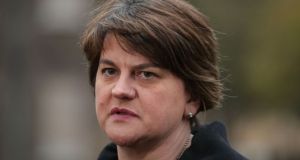 Ms Foster said Mr Gove’s four main commitments must be adhered to by the British government.

The Ulster Unionist Party and the Traditional Unionist Voice party, however, expressed concerns about the commitments with TUV leader Jim Allister complaining of “Brexit betrayal”.

He added that “these processes will build on what already happens at ports like Larne and Belfast”.

Ms Foster said she would prefer “no checks at all” but accepted there already were some checks on agri-products coming into Northern Ireland.

“Obviously I didn’t like the protocol at all but we have to make sure we minimise it as much as possible,” Ms Foster told the Northern Assembly Executive Office scrutiny committee when commenting on Mr Gove’s document.

“I’m very pleased to see it talks about the unfettered access from Northern Ireland into the rest of the UK market,” she said.

Ms Foster added: “There won’t be any tariffs paid on goods that are moving between parts of the UK, there won’t be any new customs infrastructure – that is good news as well – and that, of course, we’ll benefit from any new trade deals.”

The UUP leader Steve Aiken, however, said Mr Gove’s statement didn’t “provide the absolute certainty which businesses need and they certainly won’t assuage the concerns of unionists” that more infrastructure would be built at Northern Ireland ports.

“The UK government now needs to stand up and defend the interests of Northern Ireland in continued negotiations with the EU,” he said.

“The public words of government ministers in the past haven’t matched their subsequent actions. It’s time they did,” added Mr Aiken.

TUV leader Mr Allister said as he had “repeatedly warned government assurances about there not being a border in the Irish Sea have proven to be false”.

“It is betrayal of the highest order, made all the worse by repeated assurances that it would not happen,” he said.

Sinn Féin South Down MP Chris Hazzard said it was “clear the British government is planning for Border control posts and checks at ports of entry in the North for agri-food goods coming from Britain and elsewhere outside the EU”.

Mr Hazzard, who said this demonstrated the “fork-tongued approach of the British government”, called for the December 31st Brexit deadline to be extended, as did the SDLP Brexit spokesman, Matthew O’Toole.

He said Mr Gove’s “document is typically replete with sweeping assertions and promises, but precious little detail on how these will be delivered”.

“No one in Northern Ireland can be in any doubt about the value of promises from Boris Johnson’s government,” added South Belfast MLA Mr O’Toole.

Alliance MP and deputy leader Stephen Farry also said the transition period must be extended “given the need to focus on the Covid-19 crisis and its economic fallout”.

Dr Farry said it was “important to recall the protocol is the sad and inevitable outcome of the UK government’s decision to pursue a hard Brexit over the heads of the people of Northern Ireland”.