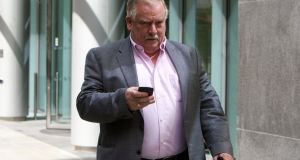 The State will be left with a bill of more than €15 million for the reconstruction of Priory Hall, the notorious firetrap apartment complex in north Dublin, according to new figures from Dublin City Council.

The council has finished rebuilding the complex, which was originally constructed in 2007 by former IRA hunger striker Thomas McFeely.

The High Court ordered the evacuation of the 187-apartment complex in 2011 due to fire risks.

The cost of the remediation works has reached €45 million, the council said. So far 66 apartments at the renamed New Priory complex have been sold for a total of €13.9 million. A further 39 apartments are “sale agreed”, with 22 homes still for sale.

The council said the projected sales figure for the 61 units is €15.7 million, meaning combined sales could yield just under €30 million. The public purse will still be owed in excess of €15 million, and faces potentially higher bill once the final reckoning has been completed.

“The final cost of the remediation works will not be available until the final account for the project has been concluded,” the council said.

The €45 million bill does not include the costs of apartment rents and hotel bills for the 254 residents, the costs of security in the years in which the complex was vacant, the purchase of apartments formerly owned by Mr McFeely, or the council’s legal fees. These costs could add another €5 million to the bill.

“It also begs the question, why was the State willing to step in in Priory Hall but not in the hundreds of other defective Celtic Tiger buildings that have since come to light? We need further reform of our building control system, and we need a latent defects redress scheme for all the other Priory Halls out there.

“Neither Tom McFeely nor any other director of Coalport was ever held to account for Priory Hall. Residents were put through hell.”

In 2013, under a resolution process overseen by Dr Martin McAleese, the council agreed to take over the complex and refurbish it at a cost of €10 million. This was to be funded by the exchequer but recouped through the sale of apartments.

When work began in mid-2014 it emerged that far more extensive reconstruction was needed, including the removal of foundations containing the structurally-damaging mineral pyrite, and costs rose to €27 million. Construction-price inflation saw this figure almost double in the subsequent years.

The council said the 127 apartments were being sold in the main to first-time buyers “at prices that represent very good value in comparison to other housing developments in the city”.

“Without the strong intervention from government this apartment complex would likely still be lying vacant and derelict.”