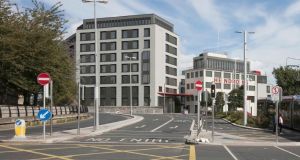 CGI view of the proposed development at Hedron’s Building, Broadstone.

A scheme to turn a protected modernist building in Dublin’s north inner city into a co-living development would create “tenements of the future”, city councillors have said.

Western Way Developments Ltd is seeking permission from An Bord Pleanála for a 280-bed shared accommodation scheme in blocks up to nine storeys incorporating the 1940s Hendron’s Building in Broadstone. The former industrial building on Western Way is one of the few modernist buildings on the city’s Record of Protected Structures.

Minister for Housing Darragh O’Brien in late November announced a de facto ban on new co-living developments where shared kitchen and living facilities serve multiple en suite rooms. However, the ban was not signed into law until December 22nd, and in the intervening period the developers lodged their application with the board.

However, councillors on Wednesday agreed to write to the board advising permission should not be granted.

Independent councillor Cieran Perry said the scheme was “developer-led, to maximise profit at the expense of the occupants and the local community”.

His Labour colleague Declan Meenagh said it was “profoundly sad” that no social housing would be provided in the development.

Independent councillor Christy Burke said “co-living is the tenements of the future”, while Independent Nial Ring said making the application after the Minister announced his intention to ban co-living “flies in the face of all that’s right in planning”.

Consultants representing the developer said “due to the changing demographic trends in Dublin and the rising costs of renting, there is a demand for this type of accommodation, and, accordingly, there is a requirement for the proposed development to contribute and address the housing crisis”.

They also pointed out that the development would result in the refurbishment and reuse of the Hendron’s Building.

Councillors also agreed to oppose a co-living development for the nearby Phibsborough shopping centre. Developer MM Capital lodged its application for a 321-room co-living scheme in the same week as the Hendron’s application.

Labour Senator Marie Sherlock questioned the “meaningfulness” of the co-living ban when it was not being applied retrospectively to developments submitted after the Minister made his announcement.

The north inner city was being “hardest hit by Government inaction on co-living”, she said.

“The failure to retrospectively apply the ‘ban’ to applications already in the planning system could mean that up to 1,491 co-living beds could be approved within a 1.6km radius within residential communities in the northwest inner city over the next 12 months.”