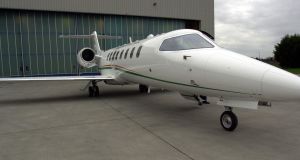 The Defence Forces has requested permission to deploy the Government jet, which is operated by the Air Corps and is the only aircraft in the corps’ fleet capable of making the journey. Photograph: Bryan O’Brien/The Irish Times

The Government is making plans to rent an aircraft to evacuate Irish army officers from the Democratic Republic of Congo (DRC) amid growing fears for their safety during the coronavirus pandemic.

Two Irish army officers are among the almost 20,000 peacekeepers currently deployed to the United Nation’s MONUSCO mission in the central African country. The act as observers in the city of Goma on the border with Rwanda.

The officers, a captain and a lieutenant colonel, were due to rotate home as normal around now but this was postponed for three months following a request from the UN Secretary to suspend all peacekeeper rotations to prevent the spread of coronavirus in developing nations.

However this week, Defence Forces Chief of Staff Vice-Admiral Mark Mellett told the Government there are immediate fears for the troops’ safety due to growing tensions in the country relating to the pandemic. Other countries such as Canada and the UK have already evacuated their observers.

On Thursday it was confirmed Minister of State for Defence Paul Kehoe supports the chief of staff’s proposal to remove the soldiers immediately and not replace them.

The Defence Forces has requested permission to deploy the Government jet, which is operated by the Air Corps, to fly the peacekeepers out but this request has not yet been granted due to the complexity of such an operation.

The jet, a Learjet 45, is the only aircraft in the Air Corps’ fleet capable of making the journey. However the Department of Defence said that while it is capable of being deployed to the DRC, a repatriation operation would require refuelling stops in seven different airports as well as overnighting “at least twice”.

It is understood at least four pilots would be required for the operation.

“The restrictions and isolation requirements in place in European and African countries as a result of Covid adds to the complexity of this option,” a spokeswoman said.

The Department said it has been working with the Department of Foreign Affairs to secure diplomatic clearances from various refuelling on the route to and from the DRC.

However it is understood officials now prefer the option of hiring a private aircraft with a much longer range instead.

The department spokeswoman said it is “examining the option the option of chartering an aircraft which would be capable of making the journey as a single flight.”

Senior officers have expressed frustration at what is perceived as Government delay in facilitating an evacuation, sources told The Irish Times.

The dilemma posed by bringing troops home during the coronavirus crisis has highlighted the Defence Force’s lack of a strategic airlift capability.

Ireland is the only EU country without any long range troop transport aircraft. Typically the Defence Forces charter commercial planes or ask for assistance from other air forces to move troops internationally - two options which are now no longer available due to the crisis, the department said.

As a result, the 350 Irish troops currently deployed in Lebanon on the Unifil mission are unlikely to return home before late June. They were originally due home around mid-May.

In the Dáil on Thursday, Taoiseach Leo Varadkar said he has asked Vice-Admiral Mellett to explore the possibility of buying an aircraft for troop transport. He said aircraft may be cheaper now that most commercial flights are grounded.

The two Irish officers in the DRC are armed but live in an apartment in Goma rather than a secure compound. “They are very exposed as none of the normal force protections are available to them,” a source said.

Mistrust of foreigners, particularly westerners has been growing in some African countries, including the DRC, since the start of the pandemic due in part to urban myths that westerners are more likely to contract or spread the virus.

The tensions compound an already volatile political and ethic situation in the country. In the last month some 200,000 people have fled their homes in the eastern DRC due to clashes between government troops and armed groups, the UN said.

“In an already very volatile environment the locals are spooked over Covid-19 and are beginning to blame and target white foreigners,” a source said.

The DRC has reported a relatively low number of Covid-19 infections to date- there have been about 1,200 reported infections and 50 deaths. However the country’s health system, which is already struggling to contain outbreaks of measles and Ebola, is ill equipped to deal with the virus and there is fear further spread could have a devastating effect on the region.

Irish peacekeepers in Mali and Kosovo were rotated home last month after the Government sought exemptions to the UN’s ban on troop movements.