Cathy Belton’s Isolation Diary: ‘Sourdough is like looking after a Tamagotchi’

The actor on baking, her favourite podcasts and getting upstaged by Dame Daisy 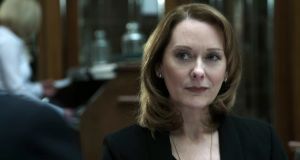 Cathy Belton and the rest of the cast were in the third week of rehearsals for The Little Foxes at the Gate, due to open on April 1st, when they got the call halting rehearsals. “It was such a happy rehearsal. A great play by Lillian Hellman, really well written, with [the American star] Elizabeth McGovern. We’d managed to have our first full run. It was like we were stopped mid-labour. And the character was still with me, I couldn’t let go of her for two weeks.”

It was a brutal chop, but Belton, star of screen as well as stage, is hopeful for the future. “I really believe theatre is one of the most potent of the arts, but it’s one of the most fragile as well.”

She recalls an opening night card years ago from actor Clive Geraghty, which has “haunted me over these last few weeks”, where he quoted American novelist and playwright William Goldman: “We need our storytellers. Somebody’s got to keep us alive through the dangerous night when the flames are flickering, and the wolves howl.”

She sees how we’ve all been clinging to “that storytelling store” over the pandemic. “We’re clamouring for it, we’re feeding on books, we’re looking at Netflix, we’re reading poetry. We’re not together, but if we can hold by the fire within our imaginations and our souls, we will all gather again.”

That said, “I’ve been asked to stay at home and do nothing for the first time of my life. I’m in a really luxurious position compared to health workers and people on the front line, and my gratitude is huge.”

Belton is staying at home with her husband Brian Rowe near the Grand Canal Harbour in Dublin 2, and the city is “beautiful at the moment. Our walks at night or in the morning, through these empty streets, looking at buildings I haven’t noticed in years.” Her radius, even when it was 2km, took in Grafton Street, Merrion Square and the edge of Sandymount. The first walks around the empty city were eerie, but now “it’s quite beautiful”. She used to listen to podcasts while walking, but now is “listening to the podcast of what’s around us, the birds and the stillness. I think I’ve become the Forrest Gump of walking within my radius.”

Shortly after shutdown, the Abbey theatre launched Dear Ireland, a series of 50 new monologues commissioned as a rapid-response to Covid-19 and broadcast on YouTube. Belton performed Blindboy’s piece (it’s on the Abbey Youtube channel). “It’s a very funny piece, and he was so wonderful to work with and play with [remotely]. And bless my husband Brian, who is not in the business. Suddenly he became the professional cameraman. We have a beautiful little dog called Daisy [who features in the monologue]. She is now known as Dame Daisy. That created an All About Eve moment. We filmed around Dublin and I swear to God I’ve upstaged myself with a bloody dog.”

Rowe, a solicitor, has been working through the shutdown, walking up the canal to the quiet office. Belton rises with him, and has taken to making porridge bread (“you’ll have to try it, it’s delicious – eggs, natural yoghurt and porridge oats”), and his lunch (“because I can. Never done that in me life!”). Then, alone with Daisy, “I slip on some Prince and dance around the kitchen with the dog”. The attraction wore off for Dame Daisy. “Now, she is looking at me going: you’ve lost the plot, I’m so over this. But I’ll entertain her, it means I’ll get a good walk from her.”

Now with time, she’s enjoying cooking and baking. “I took down all the recipe books. Planning a meal, and then just taking the time to relish and eat it and talk.” She mentions an eight-hour roast lamb and paella.

“I didn’t realise I had two baking tins in the back of the cupboard. But this sourdough thing is wrecking my head. I’m not going there… putting your starter in the refrigerator, feeding it. It sounds like looking after, do you remember those Tamagotchi things? No, that’s stress.”

Over brunch at the weekend she and Rowe “sit down and we read The Irish Times cover to cover. It’s great to allow yourself the time.” They loved the Fleabag monologue online, and watched the last two series of Sopranos during shutdown – “sublime television” – so much that the dog would recognise the opening credits and jump between them on the couch. “She’s loving James Gandolfini.”

Belton enjoyed Anne Enright’s Actress and Liz Nugent’s Little Cruelties, and “I bought Middlemarch. I’ve always wanted to read it. Middlemarch remains unopened, yet I’ve taken to dancing with the dog to Prince every morning. That’s okay, whatever gets you through.”

Her favoured podcasts include Blindboy’s; Here’s the Thing interviews by Alec Baldwin; Desert Island Discs from Mary Berry to Anne Enright; and Two Shop Podcast by Craig Parkinson. “Poetry is very comforting and a balm at the moment. I leave it around the house, and pick up and dip in. It’s almost like an instant, potent hit, it stills you at the moment.”