Coronavirus: HSE says new three-day target for testing and tracing to be introduced 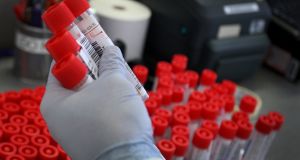 A new plan for Covid-19 testing is to be published on Thursday committing to a 72-hour turnaround time for the the completion of test and contact tracing, as well as the long-promised target of 100,000 tests per week. Photograph: Lisa Maree Williams/Getty Images

Health Service Executive (HSE) chief executive Paul Reid has said a target will be introduced next week to turn around testing and tracing in 90 per cent of cases within three days.

Speaking at a HSE operational briefing in University College Dublin today, Mr Reid outlined a new road map for testing and tracing that has been agreed by the health service, the Government, the Department of Health and the National Public Health Emergency Team (NPHET).

“We need to improve where we’ve been at,” he said, while defending progress made to date. “We have faced very significant backlogs which resulted in a very poor experience for many people,” he said, adding the HSE had been “rightly judged and held to account”.

However, Mr Reid said the health service had met or exceeded all its targets on swabbing and testing capacity, as well as turnaround time for tests to be completed and contact tracing to be completed.

His comments come amid scrutiny of the State’s contact tracing and testing process, seen as a key element of relaxing restrictions on movement and other measures over the summer.

Experts have said current timelines are too slow relative to where they should be to help ensure the disease is kept under control as lockdown measures are relaxed.

According to documents presented by Mr Reid, by Monday, testing capacity will be 15,000 tests per day. Swab-to-result time will be between one and two days, and end-to-end turnaround times will be three days or less, the documents say.

On May 5th, the swab-to-result time was two to three days, and end-to-end turnaround time was around five days

Mr Reid said the HSE is now using a variety of different systems for testing and tracing, which can cause difficulties.

“What we are dealing with . . . is a whole history of legacy systems all across the country, adding there is a “range of separate systems” that often do not talk to each other. Mr Reid said increased automation will aid turnaround times.

Cillian De Gascun, head of the national virus reference laboratory and chair of the Coronavirus expert advisory group, emphasised the impact of problems with data errors and a lack of automation.

“We are reliant on the dataset that’s coming into the laboratories and ensuring everything can be streamlined from start to finish. This can be a small thing, an individual or human error at the start – from a data entry perspective it’s very difficult to catch that once it gets into th eprocess. It’s really key to get things correct when they come into the system.”

While the HSE is currently modelling based on 15,000 tests per day, giving around 450 positive results, Mr Reid said the model could be scaled up to react to higher levels of the disease in the population without missing the target.

“The model we have put in place is there to scale up to whatever positivity levels rise within the community, so that’s what we have to build for,” he said. “The higher positivity rates . . . we obviously have to mobilise to whatever the positivity is.”

Mr Reid said that politicians publicly setting targets which the HSE had struggled to meet is “not particularly unhelpful”.

“For me it’s about getting to a model very quickly and can meet whatever volumes come along.”

Asked about data entry errors, the HSE clinical lead for testing Niamh O’Beirne said the main data enrtry is a phone number, and that data is missing around 10 per cent of the time. Using other methods, contact details of a case can be gathered 98 per cent of the time, and then “there’s only about two per cent that remains where we have a challenge on phone numbers”. She said tracing would eventually be completed on these cases.

Asked about bringing the time for the process down to 24 hours, Mr Reid said that was not currently in the plan but it “would be what I’m looking at in terms of a future model of operation”.

“There’s big issues here in terms of the dispersal of the Irish population across rural centres, the number of labs you would need have all across the country to have those swab results going straight to a lab.”

Dr Colm Henry, the chief clinical officer of the HSE, indicated widespread testing of healthcare workers is not under consideration, partially due to a relatively low positivity rate detected in healthcare workers during testing sweeps of nursing homes.

“It’s unlikely that there’ll be widespread indiscriminate testing given the low positivity rate at this time. Of course that may change depending on the pattern of the disease,” he said, adding they would be guided by public health opinion and advice.

The design of the test is currently being finalised, he said.

“Based on what we know from a different type of test in the nursing home population, we were reassured to say the least of the low level of positivity among healthcare workers and patients overall in the long-term residential care setting.”