St Patrick’s Day in Chicago: no place for chlorophobic unionists

Picture yourself floating in a boat on a river, rendered bright green by a tangerine dye

Chicago has been dying its river green for more than 50 years. Video: AccuWeather 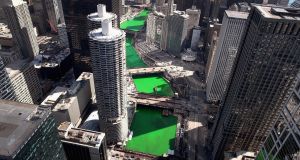 The Chicago River as it winds its way through downtown after being dyed green. Photograph: Scott Olson/Getty Images

If you suffer from chlorophobia (fear of the colour green), downtown Chicago is not the place to be around St Patrick’s Day. But if you happen to be a chlorophobic unionist, it must be a nightmare.

The worst part is the mysterious powder with which the locals famously dye the river every year. It starts out orange, of all colours, before being miraculously transformed on contact with the water. Then, before you can say “Mary Lou McDonald”, the orange turns to a green so intense, especially when the sun shines on it, it’s like the 40 shades combined.

Not even the most devout Catholic nationalists in Chicago would claim the river contains holy water. But the formula for the dye, said to be vegetable-based, environmentally friendly, and of a kind once used by plumbers for detecting leaks, is the closely kept secret of two local families, the Rowans and the Butlers, who have been performing this sacrament for more than half a century.

So it retains an air of mystery, even though the process is itself an annual spectacle. Three hours before the St Patrick’s parade, two boats take to the river, the first crew distributing “40 pounds” of the magic powder, the second mixing it. It takes a while to achieve the perfect consistency. But the boat crews know their trade, and by the time the marchers pass, the effect is at its height.

Back at the start of the parade this year, meanwhile, there was another colour change – subtle but noticeable – going on. It affected the demeanour of the official Irish delegation, who were left red-faced by the unforeseen addition of a toxic substance called “Conor McGregor” to the guests of honour.

McGregor absorbs attention in the US like the Chicago river absorbs powder, so the official VIP Leo Varadkar was badly upstaged. The box-office mismatch aside, the Taoiseach was also forced into uncomfortably proximity with a man who seems ever-more intent on justifying the nickname “Notorious”.

At one point, only the Chicago mayor, Rahm Emanuel (who may have had some explaining to do), separated his two guests. Thereafter, the number of buffers grew to something more comfortable.

He was back on safer ground by then, or rather water, as guest of a river boat tour hosted by Tourism Ireland. Having launched the boat, they also launched a book called Ireland’s Greening of the World, marking 10 years of the ingenious national marketing campaign by which multiple global landmarks are colonised by coloured lighting every March 17th, at very little cost.

This year the list included everything from the Leaning Tower of Pisa to Dubai’s Burj al Arab. But the piece de resistance, arguably, was the stuff by now under Varadkar, and all around him.

Speakers had to shout to be heard by the huge, raucous gathering. Only the priest who gave the pre-dinner invocation was heard in silence

Picture yourself in a boat on a river, rendered bright green by a tangerine dye. The effect was psychedelic. With the sun glinting on the water, and off the surrounding skyscrapers (including the local Trump Tower), it was like an Irish-themed LSD trip: Leo in the Sky with Diamonds.

An experience of a rather earthier kind had awaited the Taoiseach when he was chief guest at the annual Irish Fellowship of Chicago dinner the night before. His speech included a joke about the belated official pardon for Mrs O’Leary’s Cow, long blamed for starting the great fire of Chicago, which Varadkar then developed into a serious point about the scapegoating of immigrants generally.

But it was not an occasion for subtlety. Speakers had to shout to be heard by the huge, raucous gathering. Only the priest who gave the pre-dinner invocation was heard in silence. Otherwise it was like the advanced stages of a very large Irish wedding, or wake. Or both. The Taoiseach would have needed a loudhailer to be heard.

Long-time observers thought the occasion more suited to the oratorical talents of Michael Ring, who was also part of the visiting delegation. He was not among the speech-makers, but he was certainly in his element. Noting the high numbers of Mayo emigrants present, and in Chicago generally, he was even thinking of a late career change. “If I ran for mayor here, I’d be elected,” he told us afterwards. We had no trouble believing it.