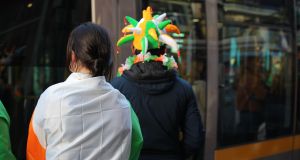 There was plenty of flags and shamrocks to be seen on Irish public transport on St Patrick’s Day. Photograph: Dominic McGrath

Parents with children in tow stagger onto a waiting train at Donaghmede Dart station. At Heuston, a group of mildly inebriated tourists are trying to navigate the Luas map, while across Dublin transport staff keep watch over the thousands who have descended on the city for St Patrick’s Day.

Dublin on St Patrick’s Day is a riot of green flags, shamrocks and alcohol, making it one of the busiest days of the year for staff and passengers on a transport system that has increasingly been grappling with concerns over anti-social behaviour and violent incidents.

With no staff presence, broken ticket machines and only a gaggle of French tourists for company, waiting there offered an eerie start to the day

At 9.30am in Howth, it’s easy to forget there’s a festival at all. Yet as the train edges closer to the city, it becomes harder to ignore the shamrock hats, the fake ginger beards and the guitarist at Donaghmede delighting passengers with a rendition of Dirty Old Town.

At Clongriffin at 10.30am, there is little sign of the anti-social behaviour that has become a bugbear for the local community.

The number of violent or anti-social incidents on public transport is growing, with 407 complaints of anti-social behaviour on Irish trains last year, up from 246 the year before.

Tommy Broughan, Independent TD for Dublin Bay North, described a “constant level of complaints” from constituents about anti-social behaviour and vandalism at the station.

“We have asked for stations like Clongriffin and Donaghmede that there would be security so you wouldn’t come out on your own,” Broughan said. On busy days, like St Patrick’s Day, it’s worse. “People feel intimidated around festival times,” he said.

Indeed, it was hard to ignore the strange emptiness of the large concrete station. With no staff presence, broken ticket machines and only a gaggle of French tourists for company, waiting there offered an eerie start to the day.

However, as the train got closer to Dublin, the carriage became sweaty and cramped as children and families competed for space with adults out for a day of drinking.

As we alight at Connolly station, cans are cracked open as hundreds of people mill through the turnstiles while a group of gardaí look on.

What differentiates St Patrick’s Day from an average day, aside from the crowds, is the sheer weight of security, stewards and gardaí on platforms, from Connolly Dart Station to the Smithfield Luas.

For numerous drivers and staff who spoke to The Irish Times, this is what made a difference.

The National Bus and Rail Union has long called for a transport police unit, similar to those found in the UK.

Maloney sees it as necessary not just for drivers, but for passenger safety: “We’re protected to a certain degree, but the passengers aren’t. They’re vulnerable.”

This view is echoed by Siptu, whose transport sector organiser John Murphy said: “The physical threat to workers and passengers using public transport is a high priority issue.”

However, John Power, chairman of the Railway Safety Advisory Council, suggested that it was not realistic to create a dedicated transport police force. Instead a “greater push towards community policing” could create significant progress, he said.

Specific figures for transport-related crimes on previous St Patrick’s weekends are not available, but a spokesman for Iarnród Éireann said two incidents were reported respectively at Heuston and at Pearse last year out of 100,000 journeys.

Today, there was little sign of anything serious. Groups of teenagers singing and chanting on the Luas was as dramatic as it got during daylight, even if drinking was largely tolerated.

One Iarnród Éireann driver, who asked for his name not to be used, said the company will be praying it can get through the weekend without attention being focused on anti-social or violent incidents.

Drivers, they said, often feel discouraged from reporting incidents that are increasingly seen as commonplace. Fears are echoed by staff across the system.

Colin Whelan, a Dublin bus driver, described how an unprovoked attack by a passenger left him off work for nearly four months. The attack, which saw the assailant shatter the protective glass in his cab, rendered Whelan shaken, covered in blood and forced to undergo tests for hepatitis, Aids and HIV.

Having worked for Dublin Bus for 22 years, Whelan says one can never predict where or when anti-social behaviour will occur. “There’s no logic to it. There’s no rhyme or reason,” he said. “There can be a darker undercurrent and that’s one thing you can never be prepared for. It doesn’t happen very often, but when it does, it’s quite frightening.”