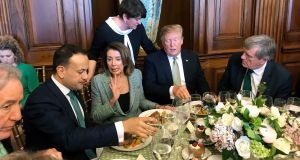 When British forces invaded Washington in 1814, they didn’t just destroy many of the city’s finest buildings.

No, there was the added insult of what they did beforehand. As a pained tourist information sign near the White House explains: “After nearly an hour of eating and taking souvenirs, they torched the structure, leaving only a roofless stone shell.”

The British occupation of the city lasted little more than 24 hours, and the buildings have long since been restored to former glory. But the humiliation must have had a lasting effect, and may even explain a curious tradition that attaches to the annual – much more friendly – invasion of the city by people from another island in western Europe.

While the official guests of St Patrick’s week are now generously wined and dined in those same buildings, a small section of invaders, known as “the media”, are treated like returning redcoats.

Still cut off from the outside world, the redcoats get to visit the White House Oval Office for the meeting between president and Taoiseach

It’s not just that these are uninvited to the set-piece meals: that would be too humane. On the contrary, they are invited, but in an observer capacity only. They get to spend the day watching important people eat, while not being allowed to eat themselves.

Veterans of the trip try to warn newcomers about this. “Bring food,” they say. “Otherwise you’ll be eating your own arm off by lunchtime.” But there are always a few innocents who haven’t heard of what happened in 1814, or of the annual commemoration, and don’t bring anything.

Their torture starts at breakfast time, in the vice-president’s home: a structure of doll’s-house prettiness located in the grounds of the US Naval Observatory. Security considerations mean that the press-gang/redcoats need to be at the gate by 7.15am latest, ensuring that they have probably missed breakfast at their hotels too.

So a good appetite is guaranteed by the time they’re finally allowed into the house for a few minutes to watch the guests about to dine. Then, just after the Grace Before Meals, the redcoats are escorted back to their holding tent on the lawn where, possibly in keeping with some UN convention on the treatment of prisoners, coffee is provided, but nothing more substantial.

Already by now, some of them may be thinking of texting guests inside to smuggle out a few scones. Instead, by tradition, all we get are details of the menu.

After that, still cut off from the outside world, and the possibility of humanitarian relief, the redcoats get to visit the White House Oval Office for the meeting between president and Taoiseach. At least food is not openly displayed there. But then it’s time for lunch, on Capitol Hill, the start of which the press are again invited to watch.

By now, those wise veterans who stocked up on emergency supplies have grown noticeably more popular with their colleagues.

In line with American pioneer tradition, the stocks tend to be of nuts and berries, and maybe bananas, although pretzels and industrial-sized bags of M&Ms are also prized.

After lunch, in fairness, the humiliated redcoats are allowed out of captivity for a period.

But freed from watching food consumption, or being secured and transported to and from the venues where it happens, this is also probably the time they have to work and under severe deadline pressure, as the time difference between Washington and Europe adds to the tortures.

A timely hurricane not only put out the fires, it sent the British scrambling to their ships

Then it’s back to the White House for the shamrock presentation party. And if they haven’t managed to eat by then, the media may now be tempted to chew the rope that divides them from the official guests.

The cordon is marginally less secure here than elsewhere. I saw one female Spartacus in the press corps this year prevail upon an Irish politician to share the delights of the free bar.

Within moments he appeared behind enemy lines with a tray of drinks. But the media dare not cross the rope in the other direction, or else.

In 1814, famously, it was the wind that saved the city from a worse fate. A timely hurricane not only put out the fires, it sent the British scrambling to their ships.

As if to commemorate that too, this week’s Irish invaders were also pulling out of Washington on Friday, albeit inland, towards Chicago, a city infamous for its windiness.

As luck would have it, conditions there are forecast to be cold but calm for Saturday’s eve-of-St Patrick’s Day parade. The weekend’s other big event, meanwhile, is Friday night’s Irish Fellowship of Chicago Club gala, at which the Taoiseach will be guest of honour.

Their annual chastening in Washington behind them, surviving members of the Irish media are also promised dinner.