Officials assume any visit by Trump would take place in December 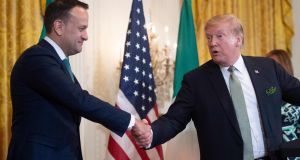 Donald Trump shakes hands with Leo Varadkar: a visit to Ireland by Mr Trump would be a political, security and logistical nightmare for the Government. Photograph: Saul Loeb/AFP

The Government has not been notified of a visit to Ireland later this year by US president Donald Trump, a Government spokesman said, but officials assume any visit would be likely to take place in December when Mr Trump is expected to attend a Nato summit in London.

The US president indicated on Thursday that he intends to visit Ireland later in 2019, taking officials by surprise, but a Department of Foreign Affairs spokesman said Mr Trump would be welcome to take up the standing invitation to any US president to visit.

In reality, political and official sources concede that a visit by Mr Trump would be a political, security and logistical nightmare for the Government.

While there is a “template” for a presidential visit following the trip by president Barack Obama in 2011, a visit by Mr Trump would be a vastly different experience. Mr Obama travelled to his ancestral home in Moneygall, Co Offaly, visiting the local pub, before returning to Dublin and addressing a massive crowd at College Green.

Government sources acknowledge Mr Trump would be more likely to face large protests rather than cheering crowds. When he visited the UK last year he avoided London altogether, where massive protests had been organised.

A huge security operation, planned for months beforehand, is a part of all US presidential visits. For Mr Trump, it would be even more intensive than usual.

While Government politicians would be obliged to observe diplomatic niceties with Mr Trump – he would, for example, be expected to call on President Michael D Higgins – some Opposition politicians will campaign against the visit and there are sure to be significant protests.

“We will certainly be involved in organising protests if he comes and I think those protests will be huge,” he said.

Labour Senator Aodhán Ó Ríordáin said there would be a “dignified protest from the country with emigrants all over the world”.

Mr Trump took Dublin by surprise last August when the White House announced he would visit Ireland as part of a trip to France for first World War commemorations in November.

Even Mr Varadkar said at the time that the announcement had come as “a little bit of a bolt from the blue”.

Irish officials scrambled to make preparations but could confirm little detail from Washington and eventually the trip was cancelled, much to Dublin’s relief. However, the White House suggested to the Irish Government at that stage that Mr Trump might be interested in travelling to Ireland this year.

The US president has a standing invitation to visit Ireland, one that is traditionally reissued every year when the taoiseach of the day visits the White House for St Patrick’s Day.

Speaking at a press conference with Mr Varadkar on Thursday, Mr Trump said: “I will be coming at some point this year. I missed it last year, and I would have loved to have been there. It’s a special place and I have a very warm spot for Doonbeg. ”

Last year’s proposed visit was expected to take in stops in Dublin and in Doonbeg, a hotel and golf course in Co Clare owned by Mr Trump.