Spider-man: Meet the guy who has a passion for collecting spiders and slugs 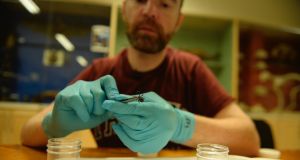 Collie Ennis surrounds himself with spiders day and night. As a research associate in the zoology department in Trinity College Dublin (TCD) he specialises in bugs of all kinds. At home in south Dublin he keeps hundreds of species of spider.

Children, he says, are fascinated by creepy-crawlies of all kinds. “I never stopped,” he explained. “I still get a thrill when I find one of these creatures. It brings out the boy in me who is fascinated by them. I started off collecting spiders and slugs, and it grew into this passion of mine.”

This week NUI Galway announced it had identified the symptoms of a bite from the false widow spider, an invasive species that can now be found in most Irish towns and cities.

The symptoms range from intense pain at the bite site, redness of the skin, swelling of limbs, itchiness and in rare cases feverishness, facial flushing and sweating.

There have been three reported cases of bites - and most likely a lot of unreported cases - from the false widow spider in Ireland, in Galway, Cork and Dublin.

Mr Ennis said the threat from the false widow in particular and from spiders in general is exaggerated and often a media perennial at this time of year when spiders are most conspicuous and have grown fat on the largesse of summer.

He keeps false widows in the laboratory at TCD - the latest he picked up from a sewer wall in Dublin. The most striking thing about them is how small they are and harmless looking.

“I know it is a cliché,” he says as he tries to capture a reluctant false widow on a tweezers, “but they are more afraid of us than we are of them”.

Spiders, he believe, get a bad rap. “There is a misconception about spiders that they are highly venomous and dangerous. It’s just not true.”

He believes the human fear of spider is a primeval one our ancestors were confronted by all kinds of creatures that could bite, sting or kill. “There may be a genetic fear built into us. Millenniums ago, if you avoided these kind of creatures, you survived.

“With the modern disconnect from nature I feel it is important to promote these animals rather than vilify them. Children don’t go out and root out under logs anymore. They spend all day on their iPads.”

Spiders, he says, should be regarded as a vital part of the ecosystem. They kill flies, woodlice and other pests that munch the furniture.

“They do so much good that people don’t realise. They are a lot cheaper than Rentokil, I tell my friends.”

* The research by NUI Galway scientists was published in the latest issue of Biology and Environment: Proceedings of the Royal Irish Academy. The original article is free to download here.