Robbers ran away with cash through UCD campus 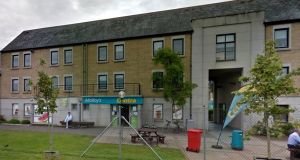 The Centra shop on the UCD campus

Gardaí are investigating an armed robbery of a shop on campus at the University College Dublin (UCD) on Wednesday evening.

The incident took place at Centra on the Belfield campus on Wednesday evening around 10pm as the shop was preparing to close.

The Irish Times understands that the two men forced their way into the shop brandishing a handgun and an iron bar.

The two men threatened the woman working in the shop and a male colleague, and demanded that the register be opened before tying them up.

The men got away with a sum of cash from the shop and ran away through the UCD campus.

None of the staff was injured during the raid but are understood to have been left “shaken” by the incident.

A Garda spokeswoman said the incident is being investigated.