Parties seek doubling of corporation tax for companies making over €800,000 in profit 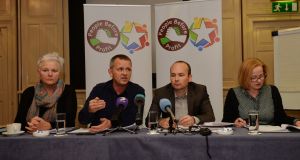 The two parties are seeking a doubling of corporation tax for companies making more than €800,000 in profits, the introduction of a financial transactions tax, a pharmaceutical levy and a millionaire’s tax.

Their pre-budget submission also proposes the abolishing of the property tax to be replaced by a landlord’s tax of €600 on those who own a second property and €1,000 on all subsequent properties.

It recommends the scrapping of the Universal Social Charge to be replaced by a new social charge on incomes over €90,000.

PBP TD Richard Boyd Barrett insisted this would not drive investment out of the country or see multinationals pull business out of this country.

He said the party wanted to see the “very wealthy” and the profits of corporations targeted to protect ordinary workers.

Solidarity TD Paul Murphy said the party’s focus was to move away from a reliance on foreign direct investment and invest in public services.

Other measures include scrapping all student fees, halve fares in public transport, free public childcare and the development of 40,000 social and affordable homes.

Asked if their submission was costed by the Department of Finance and the Department of Public Expenditure, Mr Boyd Barrett said the departments were unwilling to cost a wealth tax or their corporation tax proposals.

However, he insisted all the figures included were based on replies from Revenue or from Government departments.

Elsewhere, the two parties declined to rule out merging as one political party ahead of a general election.

Mr Boyd Barrett and Mr Murphy said it was something to be considered but stressed no decision had been made.