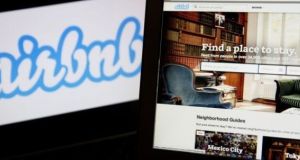 There are 5,377 Airbnb premises in the Dublin City Council area. Photograph: Andrew Harrer/Bloomberg via Getty Images

Legislation is needed to deal with the impact of short-term letting agencies, such as Airbnb, has on the housing supply, an Oireachtas committee has warned.

The rise of Airbnb and other short-term letting agencies has alarmed policymakers worldwide and led to fears that renters are being squeezed out of city centre locations as a result.

Currently Airbnb, which has almost 7,000 properties on its books in Dublin, is the biggest short-term let provider in Ireland.

The company has been engaged over the last seven months in drawing up a memorandum of understanding (MOU) with the Department of Housing as to what properties should be available for short-term letting and on what grounds.

However, the Joint Committee on Housing, Planning and Local Government has concluded that such a MOU is bound to fail and only firm legislation can deal with the issue.

Committee chairperson Maria Bailey said the phenomenon is creating a “ripple effect” with the potential to drive renters out of city centre locations.

In its report, the committee concluded the “desired outcome can only be achieved by laws and regulation giving all providers and users a level playing field in which they can operate”.

It said the MOU would be neither “sufficient nor appropriate” and would not cover other short-term letting companies in the market.

There are 5,377 Airbnb premises in the Dublin City Council area alone.

Authorities, like the council, are becoming increasingly concerned that landlords are opting for more lucrative short-term rather than long-term lets.

The committee noted that in 2015 alone, the number of properties being let for more than 90 nights a year doubled in just a single year in London and “their scale of growth and increased popularity, in Dublin in particular, bares similarities to the London market and is raising similar concerns”.

However, it also noted the absence of hard data as to the impact of the short-term letting on the housing supply.

The committee concluded: “Most witnesses felt that short term lettings are having an impact, particularly in Dublin, but had few, if any, hard facts to share.

“For that reason much of the evidence presented is anecdotal in nature and based on opinion. This must be borne in mind when considering the impact of short-term lettings on the housing and rental market in Ireland.”

The report warned the current legislation “is playing catch up to the market with no clear definition of a short-term letting existing”.

The committee proposed that the issue of short-term lets should be dealt with on a two-tier basis.

Those who engage in short-term lettings for more than 90 days every year should require a change of use and planning permission. Those letting for under 90 days a year should be exempt.

All short-term letting landlords should have to register with the relevant local authority and with the Revenue Commissioners.

In total, the committee made 13 recommendations to the Government on the issue of short-term lets.

Ms Bailey said she hoped it would “assist both the Department and the working group in their efforts to provide clarity on the appropriate regulation and management needed for controlling short term lettings.”