State Papers 1986: judge ordered no notes of discussion should be taken and no reports should appear in any newspaper 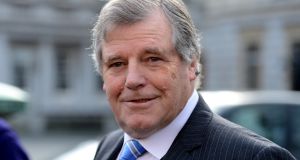 Former State solicitor Barry Galvin: in 1986 he wrote: “I requested him as earnestly as I could to do something to prevent the situation getting out of hand and in fact he became quite annoyed with me.” Photograph: Cyril Byrne

Up to 50 members of the Southern Law Association staged a revolt at Cork City District Court in 1986 after a judge threatened to jail a solicitor, according to documents released to the National Archives. The incident was triggered when a local solicitor, Gerard McCarthy, Washington Street, attempted to make submissions to Judge Desmond Windle on the evening of January 29th.

A report sent to the Director of Public Prosecutions by then State solicitor Barry St J Galvin and contained on the attorney general’s file said the judge told the solicitor he had “heard enough and was holding against him”. He threatened to find him in contempt of court if he uttered “one more word”. The solicitor protested and continued with his submissions. Judge Windle then convicted his client, found the solicitor in contempt and sentenced him to seven days in prison.

“Difficulty then arose over a committal warrant as apparently there were no committal warrants available,” Mr Galvin explained. The judge then said he would not imprison the solicitor if he paid £50 into the poor box, which he did.

The following day, a large meeting of the Southern Law Association was held and none of the solicitors appeared in court. Members demanded Judge Windle apologise to Mr McCarthy and rescind his contempt finding. He refused to do either. Mr Galvin said he himself interceded with the judge.

“I requested him as earnestly as I could to do something to prevent the situation getting out of hand and in fact he became quite annoyed with me,” he said.

At 2.30pm, up to 50 solicitors assembled in the courtroom. The president of the association John Jermyn read out a statement saying that given the incident with Mr McCarthy, solicitors could not adequately represent their clients. “All of the solicitors then stood up and left the court,” Mr Galvin said.

He contacted the DPP’s office and was advised to adjourn all his cases; if pushed to run them he was to offer no evidence. The judge did not take this very well. “He said openly that he felt that both I and the DPP were also associating ourselves with the contempt of the previous day,” Mr Galvin said.

Some cases prosecuted by gardaí went ahead against the wishes of the DPP and under pressure from Judge Windle, who spoke in “quite an aggressive fashion”. The State solicitor noted: “To be quite fair to them [gardaí], they were in a difficult situation.” He added that the judge had a conversation with an inspector about the events of the previous day and then told the media it was “an informal discussion” and ordered “no notes should be taken and no reports should appear in any newspaper”.

Mr Galvin said the judge got a call from the president of the District Court and his court did not sit on January 31st. There was no response from the DPP on file, but the contempt case did eventually make its way to the High Court in Dublin, where the order against the solicitor was quashed.