German Chancellor Angela Merkel says that her country must assume that the Berlin Christmas market incident was a terrorist attack. Video: Reuters 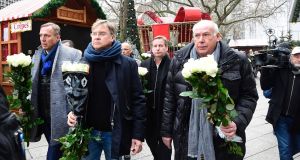 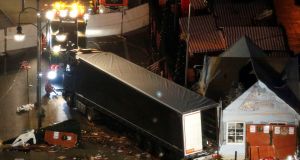 A tow truck operates at the scene where a truck ploughed through a crowd at a Christmas market on Breitscheidplatz square. Photograph: Fabrizio Bensch/Reuters 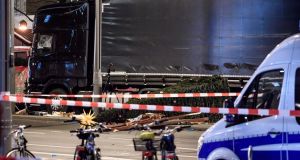 A knocked over Christmas tree lies on the floor in front of a truck at the scene. Photograph: Clemens Bilian/EPA 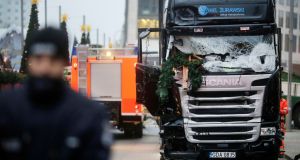 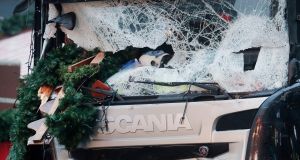 The smashed window of the cabin of a truck which ran into a crowded Christmas market. Photograph: Markus Schreiber/AP 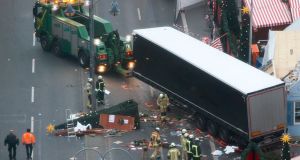 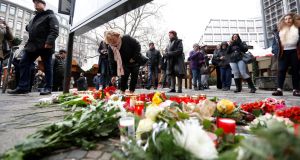 People gather to lay down flowers outside the Gedaechniskirche near the area where a truck which ploughed into a Christmas market. Photograph: Pawel Kopczynski/Reuters 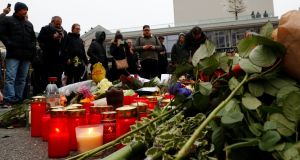 Flowers and candles are placed at the scene. Photograph: Pawel Kopczynski/Reuters 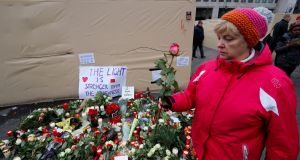 A woman carries a rose at the scene where a truck ploughed into a crowded Christmas market. Photograph: Fabrizio Bensch/Reuters

The suspect detained over the lorry attack on a Christmas market in Berlin has been released due to insufficient evidence, Germany chief federal prosecutor’s office has said.

“The investigation up to now did not yield any urgent suspicion against the accused,” the prosecutor’s office said in a statement.

The prosecutor’s office said the suspect had made extensive statements during a police hearing, but had denied the offence. It added it had been impossible to track the truck driver by eye-witnesses following the attack and that the investigation so far had not been able to prove that the suspect was in the truck’s cab at the time of the attack.

Islamic State claimed responsibility for the attack where a lorry ploughed through a market in the city killing 12 and injuring more than 45 injured.

“The executor of the operation . . . in Berlin is a soldier of the Islamic state and he executed the operation in response to calls to target nationals of the coalition countries,” the militant group’s Amaq news agency said on Tuesday.

Earlier, police investigating the incident said they believed the real perpetrator could still be on the loose.

The Pakistani asylum seeker who was arrested over the attack on Monday night denied he was responsible, with reports that the person behind it may be armed and still at large.

The suspect, a 23-year-old who came to Germany on December 31st, 2015, was captured by police in the aftermath of the incident which left 12 people dead and 48 injured, 18 seriously.

Federal interior minister Thomas de Maizière and Berlin police confirmed at lunchtime on Thursday that they are still keeping an open mind on the attack and on the perpetrators.

“We are not sure if this was the driver,” said Berlin police chief, Klaus Kandt, of the man in custody.

Earlier, the Die Welt newspaper quoted a senior police chief saying, “We have the wrong man. And therefore a new situation. The true perpetrator is still armed, at large and can cause fresh damage.”

A Christmas market visitor claims to have followed the arrested man from the scene and notified police, who intercepted him 2km away.

Mr Maizière said authorities had “no doubt” that the fatal ramming of a busy Christmas market in the German capital on Monday evening was an intentional attack.

Flags at half mast

With flags flying at half mast around Germany on Tuesday, Chancellor Angela Merkel said it had to be assumed the incident was a terrorist attack. “It would be very difficult to bear if it were confirmed that the person who had committed this act had asked for protection and asylum in Germany,” she said, a nod to the lead suspect and the 890,000 people taken in by Germany last year under her liberal asylum policy.

The German leader said the attack on a Christmas market – “where we celebrate life” – was particularly cruel.

“I don’t have easy answers,” she said. “But we don’t want a life paralysed by fear. Even if we find it difficult at present, we will find the energy for the life as we want to live it in Germany: free, together and open.”

The crash took place when the lorry, turned into the Budapesterstrasse near the Kaiser Wilhelm Memorial church.

It veered off the road and travelled up to 80m into the market, destroying wooden cabins with their backs to the street, and crushing market visitors. Eye-witnesses spoke of hearing a loud bang, and of seeing many dismembered bodies at the scene.

“We had only moved on from one of the destroyed mulled wine booths five minutes earlier,” said Marie, a 57-year-old woman from Bavaria, revisiting the scene on Tuesday morning.

“When we heard the bang we thought it was a gunshot and I just thought ‘go, go, go’. We went back to our hotel and stayed there all night.”

Police arriving at the scene discovered a dead Polish man in the the passenger seat of the truck. Mr de Maizière confirmed on Tuesday that he had been shot.

“When this shot took place is part of investigation,” he said.

The man was identified by the owner of the truck, a Polish transport company operator, as his cousin and the regular driver of the vehicle, on its way back from Italy to Warsaw with a cargo of steel tubes.

The lorry, with a shattered windscreen, and the trailer were towed away separately on Tuesday morning from the crash scene, near Berlin’s zoo. The area around the scene, a broad traffic island in Berlin’s western city centre, is still closed to traffic.

At a press conference of Berlin authorities, city mayor and state governor Michael Müller said: “We are speechless . . . it could have been any of us.”

However, Germany’s interior ministry said other Christmas markets and large gatherings would not be called off, and appropriate steps to increase security should be decided at each location.

Mr de Maizière said: “No matter what we continue to learn about the exact background and motives of the perpetrators, we . . . must not let them take away our freedom.”

The attack fuelled immediate demands for a change to Dr Merkel’s immigration policies, under which more than a million people fleeing conflict and poverty in the Middle East, Africa and elsewhere have arrived in Germany this year and last.

“We must say that we are in a state of war, although some people, who always only want to see good, do not want to see this,” said Klaus Bouillon, interior minister of the state of Saarland and a member of Dr Merkel’s Christian Democratic Union (CDU).

Germany’s federal prosecutor stepped in to take over the investigation of an incident with echoes of the July 14th attack in Nice when a truck drove down the promenade, killing 84 people and injuring more than 150.

After several near misses, and a series of attacks during the summer, German authorities have been braced for months for a serious, fatal incident.

The attack has shaken already strained public confidence in Germany, almost a year after more than 130 women were sexually assaulted at New Year’s Eve celebrations in Cologne by men, including non-nationals and some asylum seekers. In the summer, Bavaria was rocked by a series of bomb, gun and knife attacks, with some perpetrators revealed as asylum seekers linked to Islamist extremist groups.

On Monday, police in the southwestern city of Ludwigshafen confirmed they had a 12-year-old German-Iraqi boy in custody suspected of trying twice to detonate explosive devices, including one at a city Christmas market.

Even before the details of the attack were known the far-right Alternative für Deutschland (AfD), a long-time critic of Dr Merkel’s refugee policy, wasted no time in blaming the German leader.

An hour after the Berlin incident senior AfD politician Marcus Pretzell attracted fury online for tweeting: “When will this hypocrisy finally end? These are Merkel’s dead.”

Meanwhile, Minister for Foreign Affairs Charlie Flanagan said he was “horrified by the loss of life in Berlin”.

The Department of Foreign Affairs urged Irish people in Berlin to contact their loved ones to confirm they were safe and said anyone with concerns could call 01-4082000.