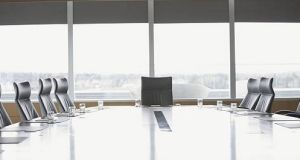 A number of commercial State companies believe official salary rates for top-level personnel are now too low to attract suitable candidates or retain existing senior staff, the Department of Transport has warned.

Briefing material prepared for the department’s secretary general also says there is “discontent” in some companies at Government policy not to pay performance-related bonuses, and that a number of chief executives are threatening to take legal action against the State. It says High Court proceedings have commenced in one case.

The briefing material also states that policy introduced by the Department of Public Expenditure and Reform eliminated benefits such as car allowances for for new chief executives in commercial State companies and for those who were having their contracts renewed.

“We are aware anecdotally that a number of boards [of commercial State companies] now believe that salaries at the levels agreed by the Government in 2011 are too low to retain or attract suitable CEO candidates,” the briefing material states.

There are about 15 commercial State companies that operate under the aegis of the Department of Transport, including the CIÉ transport companies Dublin Bus, Bus Éireann and Iarnród Éireann, as well as the Dublin Airport Authority, the Irish Aviation Authority and several port and harbour companies around the State.

Under a Labour Court recommendation last week aimed at resolving the strike at Bus Éireann, the pay of its senior management is to be cut by 10 per cent.

The Department of Transport briefing material says that “chief executive officer performance-related payments were provided for previously, and formed a standard part of many commercial CEO contracts”.

“In recent years it has been Government policy that such payments should not be paid, and the standard contract template has been revised to delete the bonus clause.”

The documents say agencies under the department have so far complied with the policy but they note “some indications of discontent at the application of the policy by CEOs who have the bonus clause still in their contract”.

“The department is aware of a number of CEOs who have performance-related clauses in their contracts and who are threatening legal action for the payment, including back payment, of such awards. The CEO of Dún Laoghaire Harbour Company has now referred the matter of unpaid bonuses to the High Court,” the document states.