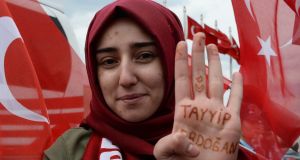 A supporter of Turkish president Recep Tayyip Erdogan awaits his arrival at Ankara following his narrow victory in a historic referendum that will give him sweeping powers. Photograph: Elif Sogut/Getty Images

German chancellor Angela Merkel said Turkish leaders should open talks with opponents and the European Union after a narrow referendum victory, while the French government urged president Recep Tayyip Erdogan not to use the result to bring back capital punishment.

Merkel said both Germany and the EU will be seeking guidance from Erdogan on the consequences of the vote while calling on the Turkish leader to act with “responsibility”.

Emmanuel Macron, the frontrunner to become France’s next president next month, said he sees no prospect of Turkey’s EU membership bid advancing in the near future.

Erdogan on Sunday won support from 51.4 per cent of Turks for a package of constitutional changes that increase the powers of his office, and his supporters are demanding he use the result to bring back the death penalty. The Council of Europe, which Turkey belongs to, raised concerns that the changes may weaken checks and balances on the president.

“There needs to be talks about these issues as soon as possible with Turkey on a bilateral basis, as well as between Turkey and European institutions,” Ms Merkel and German foreign minister Sigmar Gabriel said on Monday in a joint statement. The tight outcome “means the Turkish government and president Erdogan personally need to take on a great responsibility”, they said.

Tana de Zulueta, the head of mission of the Organisation for Security and Co-operation in Europe (OSCE), said on Monday that some of Erdogan’s opponents were subjected to police pressure during the campaign and that freedom of expression was restricted, leading to an “unlevel playing-field”.

The French foreign ministry called on Turkey to respect the European Convention on Human Rights, which prohibits capital punishment, and said it would be assessing the OSCE’s conclusions. The ministry also echoed Germany’s call for Erdogan to open up dialogue with opposition groups within Turkey.

Belgian foreign minister Didier Reynders said bringing back the death penalty would end Turkey’s chances of joining the EU, in comments reported by the Belga news agency. Macron, battling to hang on to his advantage before the first round of France’s presidential election on Sunday, said he sees little chance of Turkey’s candidacy succeeding in any case.

“There will be no advance in Turkey’s EU membership in coming years,” Macron said in an interview with RMC radio.

EU rapporteur on Turkey Kati Piri, the lawmaker tracking developments in Turkey for the EU parliament, said before the result that the constitutional changes proposed would lead to the 28-nation bloc breaking off talks on Turkey’s accession if they were implemented without revisions, and suggested the vote hadn’t given a fair chance to Erdogan’s opponents.

EU Commission president Jean-Claude Juncker, also commenting before the result, said he would also analyse the independent observers’ assessment of the referendum and that the result will shape the EU’s approach to Turkish membership talks.

“The tight outcome of the referendum shows how deeply split Turkish society is,” Ms Merkel and Mr Gabriel said. “The German federal government expects the Turkish government to seek respectful dialogue with all political and societal powers in the nation after a tough referendum campaign.”