Erdogan tells European monitors to ‘talk to the hand’ 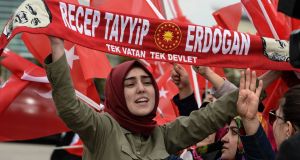 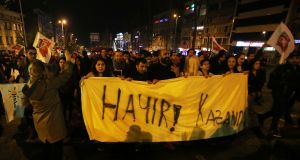 Supporters of ‘’No’’ side take part in a protest as they hold a banner which reads in Turkish “no” in Istanbul. Photograph: Petros Karadjias/AP 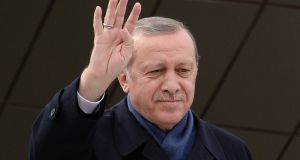 Meanwhile, Turkey’s deputy prime minister Numan Kurtulmus told reporters at a press conference in Ankara that the government was extending the country’s state of emergency by three months, starting from Wednesday.

The move is the third such extension since a coup attempt last July, and follows a recommendation by the National Security Council for another extension.

Addressing a crowd of flag-waving supporters from the steps of his palace in Ankara, Mr Erdogan told the European vote observers to “talk to the hand” and said it would not matter to Turkey if the EU broke off accession talks following the vote.

Mr Erdogan vowed that implementation of the constitutional reforms allowed by the referendum result would begin straight away.

However, Turkey’s main opposition parties have rejected the result and called for the vote to be annulled.

Thousands of people marched through at least three neighbourhoods in Istanbul following calls on social media for protests in several cities, some chanting: “Thief, Erdogan”; “No to the presidency”, and, “This is just the beginning.”

Election authorities said preliminary results showed 51.4 per cent of voters had backed what would be the biggest overhaul of Turkish politics since the founding of the modern republic.

Mr Erdogan says concentrating power in the hands of the president is vital to prevent instability.

But the narrowness of his victory could have the opposite effect, adding to volatility in a country that has recently survived the attempted coup, attacks by Islamist militants, a Kurdish insurgency, civil unrest and the effects of a war across its Syrian border.

The result laid bare the deep divide between Turkey’s urban middle classes, who see their future as part of a European mainstream, and the pious rural poor, who favour Erdogan’s strong hand.

Mr Erdogan reiterated his readiness to restore the death penalty at several appearances on Monday, something which would effectively end Turkey’s decades-long quest to join the EU.

“The crusader mentality in the West and its servants at home have attacked us,” he told a crowd as he arrived at Ankara airport, responding to the monitors’ assessments of the referendum.

“We neither see, hear, nor acknowledge the political reports you’ll prepare,” he said later at the palace.

“We’ll continue on our path. Talk to the hand. This country has carried out the most democratic elections, not seen anywhere in the West.”

A mission of observers from the 47-member Council of Europe, the continent’s leading human rights body, said the referendum was an uneven contest.

Support for the “Yes” campaign dominated coverage, and the arrests of journalists and closure of media outlets silenced other views, the monitors said.

“In general, the referendum did not live up to Council of Europe standards.

“The legal framework was inadequate for the holding of a genuinely democratic process,” said Cezar Florin Preda, head of the delegation.

While the monitors had no evidence of actual fraud, a last-minute decision by electoral authorities to allow unstamped ballots to be counted undermined an important safeguard and contradicted electoral law, they said.

The bitter campaigning and narrow “Yes” vote exposed deep divisions in Turkey, with the country’s three main cities and mainly Kurdish southeast likely to have voted resoundingly for “No”.

The official referendum results are due to be announced in the next 12 days.

Mr Erdogan, a populist with a background in once-banned Islamist parties, has ruled since 2003 with no real rival, overseeing his country’s emergence as one of the fastest-growing industrial powers in both Europe and the Middle East.

He has also been at the centre of global affairs, commanding Nato’s second-biggest military during a period of strife in the Middle East, as well as taking in millions of Syrian refugees and controlling their flow into Europe.

He vowed Turkey’s recent incursion into northern Syria would not be its last such venture in the region, saying it would carry out as many military operations as necessary in its fight against terrorism.

The secularist Republican People’s Party said it was still unclear how many votes were affected by unstamped ballots.

“This is why the only decision that will end debate about the legitimacy [of the vote] and ease the people’s legal concerns is the annulment of this election,” deputy party chairman Bulent Tezcan said.

The president responded to last year’s coup attempt with a severe crackdown, jailing 47,000 people and sacking or suspending more than 120,000 government employees, including schoolteachers, soldiers, police, judges and other professionals.

The proposed constitutional changes could keep him in power until 2029 or beyond.

Responses to the vote from Europe, which has had increasingly strained ties with Turkey, were cautious.

Germany, host to some four million Turks, said it was up to Mr Erdogan himself to heal the rifts that the vote had exposed.

“The tight referendum result shows how deeply divided Turkish society is, and that means a big responsibility for the Turkish leadership and for president Erdogan personally,” said German chancellor Angela Merkel and minister for foreign affairs Sigmar Gabriel, in a joint statement.

Relations with Europe were strained during the referendum campaign, when EU countries including Germany and the Netherlands barred Turkish ministers from holding rallies to support the changes.

Mr Erdogan provoked a stern German response after he compared those limits on campaigning to the actions of the Nazis.

However, US president Donald Trump called Mr Erdogan to congratulate him on winning the referendum, sources in Erdogan’s palace said on Monday.

Under the consitutional changes, most of which will only come into effect after the next elections, which are due in 2019, the president will appoint the cabinet and an undefined number of vice-presidents, and be able to select and remove senior civil servants without parliamentary approval.

There has been some speculation that Mr Erdogan could call new elections so that his new powers could take effect right away.

However, deputy prime minister Mehmet Simsek told Reuters there was no such plan, and the elections would still be held in 2019.

Mr Erdogan served as prime minister from 2003 until 2014, when the rules were changed to allow direct elections for the office of president, which was previously a ceremonial role elected by parliament.

He subsequently became the first directly-elected president and set about making the post more important, like the executive presidencies of France, Russia or the US.

Pro-government media painted the referendum result as a victory for the Turkish people, transforming a constitution left over from a 1980 military coup.

However, the opposition daily Cumhuriyet’s headline said: “The ballot box is overshadowed”.