Eamonn McCann: Anger still seethes on the streets of Derry 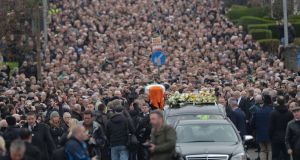 “History may mark the McGuinness funeral as the moment when the Provisional IRA was enfolded into the approved narrative of what Eamon Dunphy famously defined as ‘Official Ireland’.” Photograph: Alan Betson 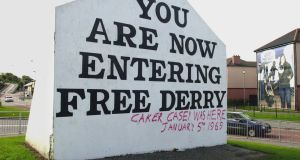 Free Derry Corner: “The peace which has descended on Derry is fragile and uncertain”

Gerry Adams was right in his graveside oration at Derry City Cemetery. There were not two Martin McGuinnesses, one who had given the green light to the operation which saw father of five Patsy Gillespie kidnapped and his terrified family held hostage while he was strapped into a vehicle and blown to bits along with five soldiers at a checkpoint on the Donegal border, and another who had become internationally admired as he worked tirelessly for peace over the last 20 years of his life, becoming hail-fellow-well-met with unionist leaders, prime ministers, taoisigh and US presidents.

Adams’s well-made point was that the old McGuinness had never gone away. What others may have been pleased to interpret as a fundamental break with his past would have been felt by himself as a frictionless transition. It was not a change of objective or even primarily of method but a shift in gear on to new terrain.

Explicitly rejecting the “two Martins” theory, Adams said: “Martin McGuinness was not a terrorist. Martin McGuinness was a freedom fighter . . . Martin believed that the British government’s involvement in Ireland, and the partition of our island, are the roots of our divisions . . . The British government has no right whatsoever to have any involvement in Ireland.”

There had been none of that sort of talk an hour earlier in the Long Tower church a few hundred metres away where a notable congregation had listened in rapt awe to Bill Clinton, standing before the Tricolour-draped coffin in front of the altar, delivering a well-crafted panegyric. We must “finish the work which he started . . . honour his legacy”.

The flag on the coffin had a particular significance in Derry, marking the end of a strict protocol which had operated in the diocese for 30 years.

Masked men had fired a volley of shots within the grounds of the Long Tower in March 1987 while requiem mass for IRA volunteer Gerard Logue was under way inside. Then bishop Eddie Daly was outraged. Flags on coffins in churches remained banned until last month.

Bishop Donal McKeown explained the change: “Mr McGuinness was former deputy first minister; President Michael D Higgins and Taoiseach Enda Kenny were attending; British government representatives were attending; leaders of the main Stormont parties were in attendance; and the Tricolour was flown at half-mast over the Houses of the Oireachtas in Dublin, even though Mr McGuinness had not been a member of the Oireachtas . . .

“It was decided that the deceased should be given a comparable honour to that which would have been accorded to a former or serving head of state or government of Ireland.”

This on the face of it was a startling suggestion. Many questioned the appropriateness of the accolade. But its main significance lay in the ideological implications: it could have been taken – and to some extent must have been intended to be taken – as acknowledgement of the status which the IRA has traditionally claimed for itself, as a legitimate force authorised by a competent authority to wage war (or declare peace) in the name of Ireland.

History may mark the McGuinness funeral as the moment when the Provisional IRA was enfolded into the approved narrative of what Eamon Dunphy famously defined as “Official Ireland”. The Derry setting facilitated the development.

McGuinness’s strength was rooted in his authenticity. Unlike most of those who emerged in Belfast in the early 1970s as leaders of the Provisionals, McGuinness didn’t come from a “republican family”, with a fully formed ideology handed down from the preceding generation. At 16, he had the self-confidence to take up a front-row position in early civil rights marches. He became a noted rioter and later a member of the IRA.

His pattern of development closely matched the political trajectory of working-class nationalism in Derry. In a way which Adams could never emulate, McGuinness was a brother off the block. His thinking might be said to have continued to shadow the community he came from down through subsequent years.

Derry is different. Since partition, the west bank of the Foyle has contained the largest single community of Catholics in the North. The contrast with Belfast, with its fragmented patchwork of mostly small, hemmed-in communities, is stark and obvious.

The west bank of the Foyle is bounded by Donegal on three sides. Walk three miles north, south or west and you are in the Republic. Only by travelling east across the river is it possible to stay in the North. The edgy sense of isolation palpable in a place like Ardoyne was never remotely as intense in Derry. Insofar as such an estimation can meaningfully be made, the Bogside housed the most self-confident working-class Catholics in the North.

For most of its modern history, though, Derry has also been defined by anti-Catholic discrimination and economic deprivation. Londonderry Corporation, with its gerrymandered unionist majority in a two-thirds Catholic city, was for half a century the most obtrusive symbol of Catholic second-class citizenship. “This is the capital city of injustice,” Bernadette McAliskey once decried to a blizzard of cheers in Guildhall Square.

This was the combination of circumstance in which the civil rights movement first erupted as a mass campaign on the streets of Derry in 1968, to be battered senseless by the RUC, thus from the beginning channelling anger at social injustice in the direction of the state itself.

The same context also helps to explain why the IRA’s armed struggle wound down first in Derry. The soldiers who perished with Patsy Gillespie in October 1990 were the last to be killed by the Derry IRA.

Some 2½ years later, in January 1993, the local IRA’s last RUC victim, Michael Ferguson (21) from Omagh, was shot in the back of the head at point-blank range on Shipquay Street in the city centre. In pouring rain in the city’s main shopping street on a busy Saturday afternoon, water gurgling down the gutter of the steep hill was streaked with Ferguson’s blood.

A policewoman who had been on patrol with him knelt over his body howling: “My friend, my friend.” Hundreds recoiled or looked away. McGuinness will have known how badly the killing went down. It couldn’t be assumed any longer that it had been the scale and particular circumstances of the Gillespie incident which had generated revulsion.

It seems attractive to many commentators to imagine that the end of Provisionals’ armed struggle was achieved by visionary leaders luring their followers away from war and on to the path of peace. This is far from the truth. It was the people who pushed the Provos towards peace.

The peace which has descended on Derry is fragile and uncertain. “Dissident” republicans – many of whom see McGuinness as a traitor and a hate figure – have a formidable presence in parts of the city. Their fortunes will depend on a number of factors, including the possibility of a “hard Border” on the roads to Donegal.

More generally, peace will be under pressure from people of the same age and background as McGuinness when he first involved himself in politics. Sectarian discrimination may be a thing of the past. The open hostility of the RUC towards Catholics may be no more. The notion of one-sided rule from Stormont, too. But discontent still seethes.

Figures which became available last week allow comparison between the gross value added (GVA, in effect GDP) of clusters of local government areas across the UK. A year before the Belfast Agreement in 1997, the GVA for the Derry/Strabane council area was about £1.45 billion (€1.7 billion), 26 per cent of Belfast’s £5.6 billion. By 2015 the Belfast figure had risen to £10.55 billion, Derry’s to £2.26 billion: Belfast up by 88 per cent, Derry by 53 per cent.

In real terms, Derry’s economy has contracted by 7 per cent since the Belfast Agreement. The comparison with Belfast may seem parochial, even fanciful. But it matters locally that McGuinness’s home city is not advancing economically but in both actual and relative terms is falling back.

The relevance of this to the chances of an enduring peace was encapsulated in a shout from among a throng of teenagers gathered aimlessly on open ground in the Carnhill area after they had listened to an appeal to disperse because older folk felt threatened by their numbers: “At least the dissidents are still fighting, McCann.”

Not, it should be noted, fighting for a united Ireland, but “fighting” as in fighting back. Neither were the Provos brought into being by a sudden uprush of militant republicanism. Rather, the armed struggle matched the mood of marchers such as McGuinness as they were beaten and gassed in the early days.

The struggle which gave rise to the IRA armed struggle had not been for a united Ireland but for fairness in society in whatever constitutional context this could be achieved. In this perspective, the Provo war was fought under a false flag.

Could the rage of Derry youngsters today living on paltry benefits, treated as being of no account, constantly harassed into phony “training” schemes or zero-hour contracts, again take the form of violence against the state?

“There will never be another Martin McGuinness,” a Presbyterian minister who had become his friend said on the day of his funeral. Certainly not exactly. But much will depends on how the local economy fares and, much more so, on who’s still up for a fight.