An arrest in Boston: ‘The Irish are staying under the radar’

The arrest of John Cunningham, a Donegal man living illegally in Boston has sent a shock wave of anxiety through the city's Irish community. He appeared on an RTE Prime Time programme in March on the undocumented Irish. Video: RTE /Prime Time 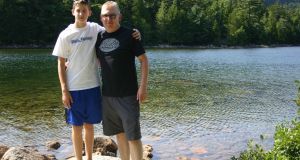 Sean Rogers (pictured with his son Eoin): ‘I would not encourage any overreaction to this individual case.’

The native of Glencolmcille had been living in the US since 1999 and had not returned to Ireland in 16 years. He featured in a RTÉ Prime Time programme broadcast in March, in which he talked about living undocumented in the country.

His arrest and deportation is the first Irish case to come to public attention since Donald Trump took office and announced a clampdown on immigrants living illegally in the US.

Below is a selection of comments we received. To add yours, email abroad@irishtimes.com.

Sean Rogers, Cambridge: ‘These incidents happened regularly in the 1980s’

The account of why and how John Cunningham was arrested is not clear and my immediate reaction is this is an isolated case and not part of any stepped up enforcement by the immigration authorities (ICE) against the undocumented Irish community. Although he appeared in a recent RTE documentary, I find it hard to believe that ICE would be trolling through the news media and taking action against individuals based on these sources.

In the mid-1980s when I arrived in Boston, these incidents happened on a regular basis and were usually the result of a tip-off or a basic mistake made by the individual concerned. I would not encourage any overreaction to this individual case, which I’m now beginning to see.

Emma Linnane, Boston: 'People are trying to stay under the radar'

While I can understand that rules are rules when it comes to immigration laws, John Cunningham has been living here for 16 years and has made Boston his home.

People are nervous and are trying to stay under the radar. The Irish have had a huge influence on American culture and it's quite sad to see the authorities implementing these strict rules. I'm lucky to have dual-citizenship and I personally don't have to worry about immigration laws, but it's quite worrying for other family members and friends here in the US.

Brian Hickey: 'The US is no longer a welcoming land of opportunity'

I have been here for three years, fully legit with a Green Card, married to a US citizen. I received my Green Card in 2010 but was then employed to manage a small factory outside London. Frequently on my visits to my wife, I would be hassled by the immigration officers which also included on one occasion an hour-long interview. The US is no longer the welcoming land of opportunity that I envisaged in my younger years. In my opinion, the opportunities, which are already limited by being an illegal, are no longer worth the sleepless nights and looking continually over one’s shoulder.  I do not think we should be surprised that the Irish illegals are being targeted – Trump is an equal opportunity bigot. I personally do not know anyone who is undocumented but I can imagine for them that living here has become a lot more uncomfortable.

Anonymous: ‘Illegal Irish in Boston are fully aware of the need to obey the law’

Boston enjoys a wonderful Irish community spirit with the Irish Professionals Network, Irish Cultural Centre, and of course an Irish mayor. I have many friends who are here illegally and they know the consequences of this. The recent arrest has not had the effect that it was reported to have. Illegal Irish in Boston are fully aware of the need to obey the law, pay their taxes and stay "under the radar". The Trump administration has been worrying not only for Irish but for the many nationalities that occupy the city. Many are now making plans to return to Ireland or have returned in recent months so that they can raise their families without constantly "looking over their shoulders”, but this has always been the case for such undocumented, even in a sanctuary city like Boston.

Marty Loughlin, Boston: ‘I’m sad to see the society that welcomed me in 1990 turn towards xenophobia’

I am from Ireland, and have lived in the Boston area since 1990. I am fortunate to have had the opportunity to come here legally on a Donnelly visa and I became a US citizen in the late 90s. Most of my Irish friends and peers are professionals who also came here legally, so the crackdown on immigrants under Trump has not impacted us directly. However, I am deeply saddened to see the diverse society that welcomed me in 1990 now turn towards xenophobia. Trump’s rhetoric and more aggressive immigration policies have legitimised expression of these, apparently, latent feelings. This has spread fear among immigrants, legal and illegal, and will ultimately hurt the future of this great country built on the ambition, drive and hard work of those who came here for a better life.

Aidan Fitzpatrick, Boston College: ‘People like John have made me feel at home across the Atlantic’

I moved to the US in August to attend Boston College on a four-year student visa. There is a strong Irish presence in both the city and the college, with a handful of people hailing directly from Ireland. Every other person claims heritage. This helped me massively in my transition period. The best decision I made to combat homesickness was getting involved in the GAA.

I play for the Boston College Gaelic football team. We train weekly throughout the year, and have the occasional game against other colleges and football clubs. The GAA community in Boston is huge. Many of our games take place in the Irish Cultural Centre in Canton, just outside Boston. It is just like any football club you’d find at home, complete pitches and a clubhouse. We also receive coaching from members of the GAA community. They do this voluntarily, as we have practically no funding.

It is people like John Cunningham who have made me feel at home across the Atlantic. Hearing this news has deeply upset me. Enda Kenny raised the question of undocumented Irish when he met with Donald Trump in March. It is clear that this issue is as relevant now as it ever has been.

Nadine Gallo, Hadley: ‘This region is up to its neck in undocumented people from all over the globe’

I live in the western part of Massachusetts, an agricultural area with a few colleges. I am the daughter of a Kerry native and an undocumented Liverpool fellow who had to re-enter through Canada at the border in 1930. This region is up to its neck in undocumented people from all over the globe. Nobody asks them for their green card as far as I know. I doubt the powers that be will deport any Irish as the Irish voting bloc is a serious threat. We have Irish congressmen from the Blaskets here.

Old Irish is taught at university level in the state flagship college. I know as much about Cuchulain as I know about George Washington. One of my sisters married a Walsh from Dublin. I wrote a novel published by a local press featuring a girl who became a rebel in 1916, Impetuous Heart, named after the words of Yeats. I’m writing a sequel where she goes to Trinity College and learns Greek.

Don’t let Trump concern you. We’re trying to persuade him to relocate to Siberia.