US president Donald Trump discusses his turnover of staff, saying "everybody wants to work in The White House, they all want a piece of that Oval Office." Video: The White House 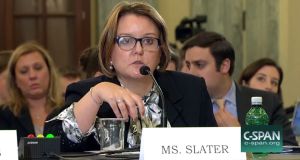 Gail Slater, who is originally from Dalkey in south Co Dublin, has taken up the role of adviser to the US president on technology, telecommunications and cybersecurity.

Donald Trump has appointed a Dublin-born lawyer to a senior job at the White House. Gail Slater, who is originally from Dalkey in south Co Dublin, has taken up the role of adviser to the US president on technology, telecommunications and cybersecurity.

A dual Irish-US citizen, Ms Slater’s role is special assistant to Mr Trump working with the administration’s national economic council. She has been living in the US since 2003.

She was reporting directly to Mr Trump’s chief economic adviser Gary Cohn, a former investment banker with Goldman Sachs and one of the president’s closest aides. However, he last night announced he was resigning.

She is one of a handful of Irish-born people to have worked at the highest level of the US executive branch and is believed to be the only Irish-born member of staff in Mr Trump’s White House.

Dublin-born Samantha Power served as US ambassador to the United Nations and on the national security council in Barack Obama’s White House.

Ms Slater joins Mr Trump’s economic team at a critical juncture as his decision to impose steep tariffs on steel and aluminium imports has threatened to trigger an international trade war. She joins amid a wave of departures from the White House.

The Dubliner has years of experience working on legal and regulatory issues involving the tech sector.

The University College Dublin law graduate started working at the White House earlier this week after moving from the role of general counsel at the Internet Association, a trade association which represents technology giants such as Google and Facebook. She advised on legal and regulatory policy.

Ms Slater, whose maiden name is Conlon, is familiar with Washington politics. She is married to Lindsay Slater, chief of staff to Congressman Mike Simpson, a moderate Republican from Idaho.

She previously worked for the US government for more than a decade, serving as a legal adviser at the Federal Trade Commission, which investigates anti-competitive business practices.

The Irish-American advised federal trade commissioner Julie Brill, a Democrat who was appointed by Mr Obama in 2010.