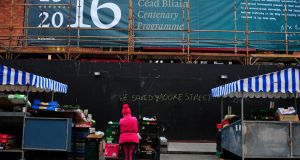 A street trader at the 1916 site on Moore Street, Dublin, during the anniversary year of 2016. File photograph: Aidan Crawley/The Irish Times

The redevelopment of the Moore Street area of Dublin and the creation of a “new quarter” in the north inner city has taken a step closer with the appointment of award-winning international architectural firm Acme, headed by German architect Friedrich Ludewig, to oversee the project.

The Retail property developer Hammerson, which is behind the redevelopment on what has become known as the Carlton Cinema site, said it was committed to producing “a vision which is fitting of this unique location”.

The area covers six acres and stretches from Upper O’Connell Street to Parnell Street to Moore Street and Henry Street and has planning permission for redevelopment as a shopping centre which runs until 2022.

In February the Court of Appeal overturned a declaration that buildings and sites on and around Dublin’s Moore Street were a 1916 Rising battlefield comprising a national monument.

The 1916 leaders met for the final time at 14-17 Moore Street, and it was there that they decided to surrender.

“We are confident the team at Acme will produce a vision which is fitting of this unique location, and we believe that the right scheme can reinvigorate this part of the north inner city centre,” said Hammerson director of retail in Ireland, Simon Betty.

He said the company was “committed to ensuring that the future development of O’Connell Street and Moore Street will seek to protect and enhance its unique heritage and connections with 1916, while at the same time delivering clear economic benefits and employment opportunities locally”.

Hammerson also confirmed plans to work with the School of Architecture at DIT Bolton Street and engage with it on the project.

After the court case earlier this year, Hammerson executives met with figures involved in the dispute over the future of Moore Street to discuss their proposals.

The chairman of the 1916 Relatives Committee, Brian O’Neill, welcomed the acknowledgement from Hammerson of the historical importance of the Moore Street and its “recognition of the sensitivities around the redevelopment of the site”.

He said the architectural firm had already done a significant amount of research into the history of the location “and clearly understands its importance”.

“I am not sure if we have reached a place of trust with the developers just yet and we are still wary around each other, but we are maybe getting there and I think that’s a positive development.”

Mr O’Neill said the process was only at a very early stage and suggested it would take “some time yet” before a full picture of what is proposed and what would become of the area will become clear.

Acme was founded by Mr Ludewig in 2007 and now employs over 70 architects, working on 160 projects in the fields of architecture and urban planning, and interior projects for private, corporate and public clients in 19 countries.

Its completed projects include the Beirut City Centre shopping complex, a major waterfront redevelopment in Doha, the Eastland shopping district of Melbourne and the Eastgate shopping complex in Leeds.

Mr Ludewig has taught and lectured as a visiting critic at the Academy of Fine Arts in Vienna, Harvard University Graduate School of Design and the Royal College of Art in London.