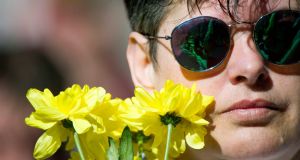 A woman attends a rally in Cork in support of the claimant in the Belfast rape trial. Photograph: Daragh Mc Sweeney/Provision

The legal systems in Northern Ireland and the Republic need to change, a survivor of rape told a rally in Cork in support of the young woman at the centre of the Belfast rape trial.

Dutch woman, Tjitske de Vries told the rally attended by over 300 people at Cork City Hall she was raped eight years ago by two men while on holiday in France.

Although she received great support from a medical centre in Spain where she went for treatment, she never reported the attack.

“I didn’t do it any wrong but I felt ashamed. I felt ashamed so much ..... I did not press charges even though the nurse that treated me said I had to do but I didn’t because I knew the statistics and I knew that if pressed charges, I would have to go through questioning over and over again.”

Ms de Vries said she did not want to face a situation where a lawyer picked up on any discrepancies in her statement and she was not alone in this regard as both men and women who have survived rape or abuse don’t feel safe and secure within the legal system.

“We have to look at changing our legal system and his toxic masculinity. One of the things I find extremely disturbing is that there are groups of young men going out in Cork and Dublin and Galway at two o’clock at night to the clubs looking for drunk young women because drunk women are easy.”

“They say ‘I pulled a girl yesterday, it was really easy’. We have to change this. It can’t go on anymore. We have to make sure that the survivors of rape and sexual assault and abuse are being heard and are feeling safe in our justice system,” she said to loud applause from the crowd.

Lorna Bogue of the Green Party told the rally a change in societal attitudes towards sexual violence was needed as she recalled how people in Listowel, Co Kerry ten years ago queued up in court to shake hands with a man convicted of sexually assaulting a young woman in the town.

Holding up a pair of lace panties, Ms Bogue said rape and sexual abuse survivors can have what they were wearing held against them in a trial situation and such was the nature of the system that “it is always the survivor who ends up on trial in rape cases in this country”.

Cllr Fiona Ryan of Solidarity told the rally which was attended by both men and women, many carrying yellow flowers in solidarity with the young woman in the Belfast rape trial, that people were disgusted at a legal system “that puts victims, not defendants, on trial”