Lecturers in Institutes of Technology ballot for industrial action 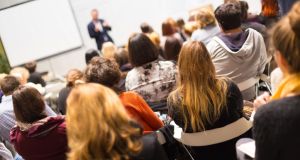 “The key element of this action is that members will deliver no more than standard lecturing hours (16 or 18) from the next academic year.”

Staff in Institutes of Technology across the country are balloting for industrial action in a dispute over working hours.

The Teachers’ Union of Ireland (TUI) said on Friday that the workload of academic staff in the Institute of Technology sector had “long since exceeded reasonable levels and was now completely unsustainable”.

The TUI said it was balloting its 4,000 members in the sector to seek a mandate to engage in a campaign of industrial action. It argued that the workload had “led to significant levels of work-related stress among academic staff and an impaired service to students”.

If passed, lecturers and assistant lecturers in Institutes of Technology would work only standard lecturing hours (16 or 18) from next autumn.

In a statement the union also called again for the introduction of a dedicated levy on corporate profits to provide resources to tackle what it described as the “funding crisis” in higher education.

The TUI said if members voted in favour of its planned campaign in the ballot, “the initial action will include delivery, at maximum, of the weekly norm of class

contact hours for the relevant grade with effect from the commencement of the 2018/2019 academic year”.

The issue of workload for academic staff in Institutes of Technology is expected to be debated at the TUI’s annual conference which commences in Wexford next Tuesday.

TUI president Joanne Irwin said the Institute of Technology sector had suffered devastating cuts to funding, which had had a severely damaging effect both on the working conditions of lecturers and the educational experience of a generation of students.

“Critically, the time that academic staff can provide to students has come under immense pressure, with significantly less opportunity to interact with individuals or small groups. This was previously a major strength of the Institute of Technology sector, benefitting students from diverse social, cultural and educational backgrounds.”

“At 16 hours (lecturer) and 18 hours (assistant lecturer), the lecturing hours of staff have long been far above international norms. Moreover, each hour of lecturing requiring a multiple of hours for the associated preparation, reflection, assessment and feedback.”

“To make matters worse, under successive national agreements, lecturers were required to ‘flex’ up by two lecturing hours above these already excessive norms.

“As a result of a negotiated agreement between TUI and the Department of Education and Skills in May 2016, one of these two hours was re-designated to other contractual duties from January 2017. Also as a result of the same agreement, a review of matters relevant to lecturing that was to have regard to the usage of the second hour for duties other than teaching was to be completed by March 2017.”

Ms Irwin said that two years on this review had not been completed and the re-designation of the second flex hour had not taken effect.

“We are therefore currently balloting members for industrial action. The key element of this action is that members will deliver no more than standard lecturing hours (16 or 18) from the next academic year.”

“This unsustainable workload, as well as diminishing the time for and quality of service to students, is causing high levels of stress among academic staff. To add insult to injury, those lecturers who entered the profession after 1st January 2011 are suffering pay discrimination.”

The TUI, on Friday, again urged the Government to put in place a 1 per cent on corporate profits to generate a dedicated fund for higher education.

“As the corporate sector derives considerable benefit from Ireland’s graduate pool, such a levy would be wholly appropriate. It would have raised an additional €588million for the sector in 2016; broadly in line with what authoritative analysis indicates as being required”, the union said.