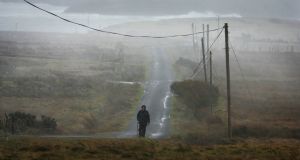 Snow showers are expected on Monday morning, especially on high ground, as Met Éireann has issued a status yellow weather warning for Connacht, Cavan and Donegal.

According to Met Éireann, many hilltops will appear white on Monday but some snow is also likely to fall on lower ground, particularly in parts of Ulster and Connacht.

There is also a continuing risk of thunder, mainly on Atlantic coasts. Lowest temperatures will be -1 to 2 degrees, with frost and ice in sheltered areas. Winds will be mostly moderate southwesterly, but fresh to strong in Atlantic coastal areas.

The national outlook is for cold and wintry conditions over the next few days, possibly turning milder from Wednesday, but staying unsettled especially in the west and north.

Some of the coldest weather will be felt on Monday night when it will be very cold with clear spells and a widespread sharp frost.

Blustery wintry showers of hail, sleet and snow will occur. Showers are expected to be most frequent in the west, with lying snow possible. The lowest temperatures will be between -1 to 1 degree, in fresh to strong and gusty west to southwest winds, with gales possible near the north coast.

Tuesday is expected to be another cold and blustery day, with a mix of rain, sleet and hail, with some snow on high ground. Afternoon temperatures will range from 4 to 6 degrees, in fresh to strong and gusty westerly winds.

It is expected to get milder on Wednesday with a mix of cloud and sunny spells. It is expected to be generally dry, with some scattered outbreaks of rain, mainly in western and northern areas. Highest temperatures of 7 to 10 degrees, in moderate southwesterly winds.

Thursday is set to be mostly dry with some sunny spells and just a few isolated showers, mainly in the northwest. Continuing mild, with highest afternoon temperatures of 9 to 11 degrees, in light to moderate westerly winds, fresher along northwest coasts.