No obvious signs of injury on remains of McGinley children 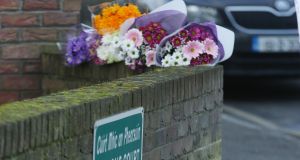 The scene at Parson’s Court, Newcastle, where the three children were found. Photograph: Stephen Collins/Collins

Gardaí believe the three McGinley children found dead in their Dublin home had been deceased for some time before they were discovered last Friday night.

Conor (9), Darragh (7) and Carla (3) had earlier on Friday attended school and creche and had returned to their home at Parson’s Court, Newcastle, Co Dublin, that afternoon.

The children died later in the afternoon.

A taxi driver saw Ms Morley on the street in the Newcastle area in a disorientated state at about 7.30pm and took her home as he was concerned for her safety, such was her condition.

However, by the time they arrived at the house Ms Morley was in a state of collapse and the driver called the emergency services.

As gardaí and paramedics were arriving Ms Morley’s husband and the children’s father, Andrew McGinley, also arrived at the house with another man.

Those present went into the property where a note was found containing instructions not to go inside but to call 999 instead.

After going into the house, Mr McGinley and gardaí found the three children dead, two of them upstairs and one downstairs.

Gardaí believe the children were given a substance that either sedated or poisoned them and were then suffocated. There were no obvious signs of injury on their remains.

Ms Morley’s condition was critical by the time she was taken from outside her home to Tallaght Hospital and, while she remained gravely ill in hospital over the weekend, she was expected to survive.

She had been on stress-related leave from Our Lady’s Children’s Hospital, Crumlin, where she worked as a nurse.

Ms Morley and Mr McGinley had lived in the general area for many years before moving into the house, which they own, on Parson’s Court.

After the children were found dead at their home at about 7.45pm on Friday, the semi-detached property was secured overnight and guarded as a crime scene.

The bodies of the three victims were left in situ overnight. Early on Saturday a preliminary examination of the bodies was carried out at the scene by Assistant State Pathologist Margot Bolster. The remains were then removed to the City Morgue in Marino for a full postmortem.

Gardaí were awaiting the results of toxicology tests on the bodies of the children which were expected to inform the cause-of-death findings.

Court told €3m owed and due under loans linked to property in Avoca Park, Blackrock