Siptu warns of disruption in disability services over pay cuts 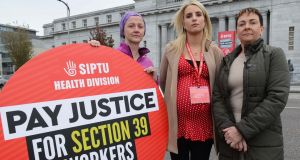 Siptu has warned of major disruption in organisations providing disability and community services unless the Government addresses growing discrepancies in pay in the sector.

The trade union says staff working directly for State bodies are paid more than those employed by third-party agencies which receive exchequer funding.

However, the Government has argued that pay for staff working in such grant-aided organisations - known as Section 39 organisations -was not a matter for State.

“It is an accepted fact that the staff of these Sections 39 organisations are not public servants,” the Department of Health said.

Siptu is initially consulting with staff in 10 Section 39 organisations regarding balloting for strike action in the weeks ahead.

The organisations include Rehab Care and the Cheshire Foundation, which are national operations, Western care in Mayo, St Joseph’s Foundation in Cork, SOS Kilkenny, the Cork Association for Autism, Ability West, and St Aidan’s Hospital in Wexford.

Siptu also warned that some agencies could be forced to close altogether, as staff moved to better-paid employment in the State sector.

Historically, services in the disability sector were provided by a mix of both State bodies and other organisations which received funding from the State.

Siptu claim that pay for staff in the Section 39 grant-funded bodies is now about 10 per cent behind that of their counterparts working in Section 38 organisations, who are considered to be full-time public service personnel.

“That would hold some degree of water, except that in 2010 the HSE formally directed Section 39 organisations to cut salaries of staff rather than cut services.”

He said that when the block grants provided by the HSE to the Section 39 organisations were scaled back some years ago, the agencies were directed to live within their reduced allocation by cutting staff pay rather than services.

Mr Bell said that, in the recent talks on pay restoration in the public service, unions tabled the matter of pay restoration for Section 39 organisation staff, but “the Government in its various guises continued to push the issue off the table.

“We did say we wanted a process, even if there was a time lag, in the restoration of pay or increments or other payments; it was better to be having a dialogue rather than engaging in disruptive strike action which many members want to ballot on in the coming months.”

Mr Bell said Siptu subsequently started to engage each Section 39 employer on the pay restoration issue in the Workplace Relations Commission and the Labour Court.

However, he said the Section 39 organisations were then instructed by the HSE “to frustrate the union’s attempts to secure restoration by continuing to go through the process and not to concede any ground whatsoever under any of the headings”.

The Department of Health said the HSE had no role in determining the salaries or other terms and conditions applying to staff in Section 39 organisations. As they were not public servants, such staff “were not subject to the Fempi (financial emergency) legislation which imposed pay reductions or the provisions of the subsequent public service agreements which provide for pay restoration.

“It is a matter for Section 39 organisations to negotiate salaries with their staff as part of their employment relationship and within the overall funding available for the delivery of agreed services.”

Jacqueline Kirby is a social care leader at St Joseph’s Foundation, a Section 39 disability service provider , in Cork where she has worked since 2005.

She experienced two pay cuts, one of about 6 per cent in 2010 and 2 per cent in May 2014. She said increments were frozen for six months for some staff.

When theprocess of pay restoration began in the public service last year she was told it did not apply in her organisation.

“I emailed and asked when we were getting pay restorations and I was informed by our HR manager that Section 39 companies had not been given it back so they were not in a position to give it,” she said.

Helen Power works in the day service at St Joseph’s Foundation in Cork as a supervisor. She has been with the organisation since 2005.

She said she also experienced two pay cuts. In addition, for the last three years there are manadatory holiday closures of the facility, and she only has four “floating” days she can choose to take off.

“They are ruining the relationship they have with some extremely talented staff around the area of disabilities which is a very hard sector to work in,” she said.

“They are not doing themselves any favours. We are a voluntary organisation . we do a lot of fundraising and I have seen a decline in the number of staff willing to help in fundraising due to the fact that they do not feel they are getting the support from St Joseph’s Foundation, from management.”

Liz Cloherty currently works in RehabCare and previously worked for another Section 39 body, Autism West, but was made redundant.

She said after moving to RehabCare she was placed on the pay scale at a level which was about 5 points below where she would have been if she had joined a Section 38 body given her level of experience.

“I took a pay cut of five increments lower, plus two cuts imposed by the Government.”

She said the HSE did not fund RehabCare to pay the first phase of pay restoration provided to Section 38 staff this year and will also not get the additional payments at the start of 2018.

She warned that the Section 39 bodies would lose staff if the pay differential continued.

“Why would you stay in a Section 39 if you could go to a Section 38 that would pay better. That affects every service user.

“The Section 39s suffer as they are not getting the funding to keep their staff.”