Garda breath test figures ‘out of kilter’ by 6.4 million at one point 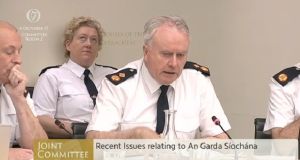 Acting Garda Commissioner Dónall Ó Cualáin said there was no evidence to suggest anyone at management level was asking their people to falsify records. Image: Oireachtas screengrab.

Garda breath testing figures were found to be “out of kilter” by 6.4 million at one point during the recent internal Garda review of data, the Oireachtas Committee on Justice has heard.

Assistant Commissioner Michael O’Sullivan, who carried out an internal review of the inflated figures, which concluded that breath tests were in fact inflated by 1.4 million in a seven year period, made the admission on Wednesday morning.

Fianna Fáil justice spokesman Jim O’Callaghan asked Mr O’Sullivan if gardaí had offered very general numbers “20, 30 maybe 40” when asked by a call taker at the Garda Information Services Centre (GISC) as to how many cars had passed through their checkpoint.

Mr O’Sullivan said GISC took such calls and that recordings were available for the period back to October 2010, thought it would take 21 years to listen to all of them.

He said there was often a lot of confusion from the recordings of the calls between gardaí ringing in the data from the roadside and the call takers.

“When I highlight recording issues; there were two different interpretations, two conflicting manuals in existence,” Mr O’Sullivan said. “One (was) at GISC and one with the operational guards. Part of my recommendations are that in future there is joint training between GISC and the guards.”

He said there were “two interpretations on how the figures were to be recorded” and that he had heard disagreement as to what numbers should go into what boxes on the force’s Pulse computer system.

“For me, it resulted in significant data... In fact at one stage the figures were 6.4 million of out kilter.”

Mr O’Sullivan said neither the individual gardaí nor the call takers at GISC understood each other’s position in the process. This was because their training was different and their instruction manuals were not the same.

Fine Gael TD Colm Brophy earlier pressed Acting Garda Commissioner Dónall Ó Cualáin on whether senior officers had pressured those under their command to inflate breath test numbers. The Garda Representative Association has claimed this was the case.

Mr Ó Cualáin said he did not believe this had happened, adding that the GRA’s claims were currently being investigated and the association had been asked for evidence.

“There is no evidence to suggest that anyone at management level was asking their people to falsify records,” he said.

Mr Ó Cualáin said managers would have insisted those under their command fully engage with the system of drink driving checkpoints and perform well under that system.

He did not accept that pressure applied by management extended to encouraging or instructing Garda members to fabricate data.

However, he said that any wrong doing that was proven against any member “at any rank” would be pursued.

Mr Brophy said it was “not really credible to believe” a “proper management structure could actually believe this level of (testing) activity was taking place”.

He said there were not enough cars on the road and gardaí in the force to create the testing numbers that were claimed for certain places at certain times.

Either management were “so inept” they did not pick up on the fact test numbers were being overstated or they “colluded together” on inflating testing numbers.

Mr Brophy told the acting commissioner he did not believe rank and file gardaí inflated testing numbers and continued to do so of their own volition and without it being noticed.

Mr O’Sullivan said senior Garda management were not even aware the number of tests was being recorded.

“Consequently there was no supervision of that data,” he said in reply to questions from Mr Brophy. “It was not part of any promotion process; career advancement. It simply sat there until it arose. I agree; it was poor management.”

Mr Brophy said it was “a very self-serving mistake” that all of the errors saw testing numbers inflated.

“People didn’t decide to record a zero entry... they came back in and made up an enlarged figure to make everyone look better.”

All it would have taken was a small number of Garda managers with “real integrity” to spot what was happening and call a halt.