HSE not funding treatment, costing up to €411,000 a year, due to doubt over clinical benefit 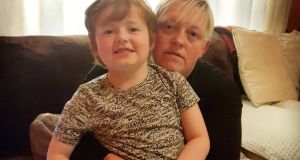 Ann Marie Walsh Harte from Co Mayo with her son Lewis, (5) who has Duchenne Muscular Dystrophy.

A group campaigning for access to treatment for young boys with Duchenne Muscular Dystrophy has pleaded with the Health Service Executive (HSE) and the manufacturer to negotiate an acceptable price for a drug.

Richard Lodge, chief executive of Muscular Dystrophy Ireland (MDI), said time was critical as once those affected lose the ability to walk they can no longer avail of the treatment.

MDI met 37 TDs, Senators and advisers on Tuesday to give a presentation on the drug Ataluren (Translarna) which is used to treat the rare debilitating genetic disorder that ultimately sees those affected consigned to a wheelchair.

The meeting was attended by Minister of State with responsibility for disabilities Finian McGrath.

The drug can slow down the onset of the condition, but comes with the caveat that it must be administered while the patient still has the ability to walk.

In July, the HSE decided it would not fund the medication in the absence of “sufficiently strong” proof of its clinical benefit. The drug costs an estimated €411,000 per patient each year. It is available in Northern Ireland and in 22 other European countries, MDI said.

In September its producer PTC Therapeutics initiated legal proceedings against the HSE for failing to meet the cost of funding two patients, a move the HSE and the Department of Health say prevents them from commenting further on the issue.

Mr Lodge said campaigners had been left without answers as the drug approval process lacks transparency.

“The only thing we can do now is to keep the pressure on,” he said. “We would urge the HSE to enter dialogue with the drug company and I have written to them [BOTH]to sit down and negotiate.”

Two families affected by the condition attended Tuesday’s presentation. Ann Marie Walsh Harte and her son Lewis (5) from Co Mayo have been unable to access the treatment. Michelle Young, on the other hand, was able to talk about how her son Michael (11) has been doing well since he started taking the medication four years ago.

The Young family campaigned for access to funding in Scotland, following three years of clinical trials.

“Many of his peers are in wheelchairs but Michael is still walking and able to do things,” she said, adding that he had “as normal a life as we could have hoped for” at the time of his diagnosis.

“It’s quite heartbreaking to see [OTHER]boys deteriorating so fast.”

Previously, the HSE said it was aware its decision was upsetting to patients and families affected but that the HSE Drugs Group did not consider the evidence for the clinical benefit of the drug to be sufficiently strong in the context of the proposed cost and budget impact.