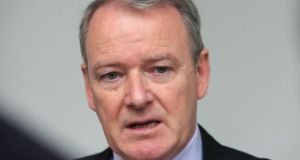 Sinn Féin TD Brian Stanley has apologised for a now-deleted tweet referencing incidents from the War of Independence and the Troubles, saying it was “inappropriate and insensitive”.

Eighteen British soldiers were killed at Warrenpoint by the Provisional IRA in August 1979.

A total of 17 British soldiers were killed during the War of Independence incident at Kilmichael, alongside three IRA men.

The tweet had provoked an online backlash, with charges that it glorified violence and bloodshed.

I will be writing to the Ceann Comhairle of the Dáil about this shameful tweet. Although deleted, it is outrageous that someone with such warped views can hold a senior position in the Dáil. SF talk about respect & equality but there’s not much sign of respect for victims. pic.twitter.com/dqMdWLI4rp

Northern Ireland First Minister Arlene Foster said she will write to the Ceann Comhairle of the Dáil regarding the “shameful” tweet.

“Although deleted, it is outrageous that someone with such warped views can hold a senior position in the Dail. SF talk about respect & equality but there’s not much sign of respect for victims.”

In a statement released through the Sinn Féin press office, Mr Stanley, the chairman of the Public Accounts Committee said: “I apologise for the content of an inappropriate and insensitive tweet I sent yesterday.”

A spokesman for the party said: “We note that Brian Stanley has deleted a tweet that was inappropriate and insensitive, and that he has apologised.

“We all have a responsibility in this Decade of Centenaries to remember and commemorate the past in a respectful manner.”

Asked for a comment on Mr Stanley’s tweet, Sinn Féin health spokesman David Cullinane said “it is fair to say that there will never be an agreed narrative on the events of the past. Our ongoing focus must be to build on the success of the peace process.”

He also said there is a responsibility to commemorate the past in a respectful manner.