Over 600,000 people awaiting outpatient appointment, according to consultant group 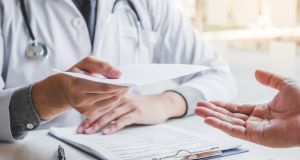 The HSE said last month there had been a net increase of more than 150 consultants over the past year. File photograph: Getty

The medical manpower problem in the State’s hospitals is significantly worse than previously believed. New figures show there are now nearly 730 consultant positions either vacant or unfilled on a permanent basis, according to doctors.

The Irish Hospital Consultants Association said there are now 45 per cent more unfilled senior medical specialist posts in the Irish health system than had been previously known.

It said the latest official figures produced by the Health Service Executive’s National Doctors Training and Planning unit this month confirm that more than a fifth of all permanent consultant posts, 728 in total, are now vacant or filled on a temporary basis by locum or agency personnel.

“It comes as 612,000 people – 12 per cent of the Republic’s population – are waiting for an outpatient appointment with a consultant . . . more than 255,000 have been waiting longer than a year, five times the 2014 number. A further 75,000 people are awaiting inpatient/day-case treatment,” said the association.

It added that of the 728 unfilled consultant posts, 554 were based in hospitals and 174 in the community – mainly in the mental health and palliative care sectors.

The new figures suggest that psychiatry and surgery are among the medical specialties affected most by the difficulties in filling posts permanently.

The association said 153 consultant posts in psychiatry and 93 consultant surgeon positions are either vacant or filled on a temporary or agency basis.

The South/Southwest Hospital Group (117) and Saolta University Health Care Group (104) in the west of Ireland had the highest number of consultant posts vacant or filled on a temporary, locum or agency basis and among the largest waiting lists.

The University Limerick Hospitals Group has the highest percentage of its posts vacant or unfilled permanently at 29 per cent , or 52 posts, it said.

Prof Irvine said there are more than 600,000 people requiring specialist medical treatment “but our system is not providing the permanent specialist expertise to care for them”.

The association has blamed pay cuts for new entrants, imposed in 2012, for much of the cause of the current manpower difficulties.