Young Travellers in Galway told her of ‘continuous checking, stopping’ by gardaí 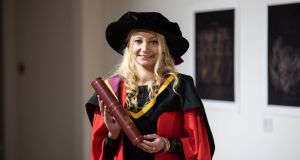 A Co Limerick woman who has become the first Traveller in Ireland to graduate with a PhD, said she has “mixed emotions” about the accolade, as it reminded her of the Traveller community’s long struggle in accessing education.

Dr Sindy Joyce, a human rights activist, and doctoral graduate of the department of sociology at University of Limerick, was one of 67 graduates students conferred with a PhD, on Monday.

Dr Joyce, from Newcastle West, said she was “overwhelmed” with emotion, and very proud of her PhD, but added: “I’ve mixed emotions – on the one hand it’s really great, especially being a woman and breaking that glass ceiling, but it’s sad too that it has taken this amount of time for someone from my community to be a PhD.”

“I’d love for all young Travellers to be able to reach as far as they want to reach, and they can do that – it’s about getting the opportunities,” said the 33-year old. “There is a lot of inequality and education gaps that need to be filled. It’s good to have people from my community getting a PhD; It’s been quite a difficult journey, but it’s good to finally get here,” she added.

“The Irish city I chose was Galway city. I took it as a case study as Galway is known to be one of Ireland’s most multicultural cities and has a large mixed ethnic population. I looked at how multiculturalism works in Galway and how young Travellers use public spaces in Galway.

“I brought groups of young Mincéirs [Travellers] on walking tours of the city and observed how they use the spaces, what routes they took and why they took them – probably to avoid negative encounters.”

Dr Joyce said she analysed “what tactics they built up and learned” while in public spaces, “because of the amount of discrimination the community faces”.

“You build up these tactics in order to overcome these racist and negative encounters; such as hiding your identity to get access to a public and shared space. You’re constantly thinking about what negative encounters could happen so you have to have tactics.”

She said she looked at policing, and how young Travellers were treated by gardaí in Galway city. “I found high levels of racism and ethnic profiling. It’s very similar to how the black community in America are policed.”

She also examined how gardaí “police or govern public areas”. The young Travellers interviewed claimed they were subjected to “continuous checking, stopping and searching without any particular reason for it.”

She also found there is a “institutionalised stereotype” of Travellers embedded in the settled community, which is mostly negative-based.