Shopper said she experienced ‘worst pain’ of her life, with thigh bone fracture 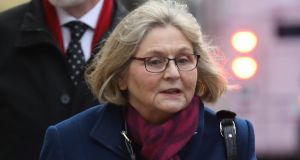 Loretta McSherry: “I was struck in the shoulder as I walked past. It was like my Superman moment, I flew forward.” Photograph: Collins Courts

A woman who claims she suffered a thigh bone fracture as a result of being knocked to the ground when a Marks and Spencer employee allegedly came off a step ladder in its Dundrum store in Dublin as she walked by has sued for damages in the High Court.

In evidence, Loretta McSherry (64), an IT systems analyst, said she had popped into the store at Dundrum Shopping Centre to get some ready-made meals and the accident happened as she walked along the bakery aisle.

“I looked at some scones but thought they looked stale and decided not to buy. I gave the step ladder a wide berth, I was not aware of anybody on the ladder,” she said.

“I was struck in the shoulder as I walked past. It was like my Superman moment, I flew forward,” she added.

She said she experienced the “worst pain” of her life, going up her leg and was in “excruciating” pain.

She rolled along the ground and was facing shelves of chocolates, she said.

Ms McSherry said she was later told her thigh bone fracture injury was consistent with a high speed car accident.

She later had to have two operations, was on crutches and was out of work for four months after the accident, the court heard.

She said she had to celebrate her 60th birthday in Portugal on crutches which “took a gloss off the whole celebration”.

She said she was a member of a golf club before the accident but does not play any more. “My life is a bit changed. I am afraid to fall again because the injury had such a catastrophic affect on my life,” she said.

Ms McSherry, Cremore, Templeogue, Dublin, has sued Marks and Spencer (Ireland) Ltd, with offices at Mary Street, Dublin as a result of the accident on January 4th 2014 at the Dundrum store.

She alleges failure to ensure the shopping aisle was safe for the use of customers and failure to have any regard for her safety.

She also claims a Marks and Spencer female employee was allowed to use a step ladder for restocking without any assistance. She also alleges failure to cordon off or prevent customers from coming into close proximity with the step ladder during the re-stocking.

Marks and Spencer denies the claims and also pleads contributory negligence on Ms McSherry’s part for allegedly failing to keep any proper look-out and allegedly failing to heed the presence of one of its employees in her vicinity. The case continues on Wednesday before Mr Justice Kevin Cross.