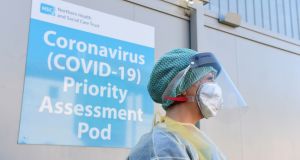 A number of Irish embassies have cancelled their planned St Patrick’s Day receptions due to the coronavirus outbreak.

Cancellation notices were sent out to invited guests by Ireland’s embassies in France and Switzerland and by the Permanent Mission of Ireland to the United Nations in Geneva on Friday.

“In light of the evolving Covid-19 situation, and having consulted the relevant authorities, we have decided to cancel our St Patrick’s Day reception,” the Irish Ambassador in Switzerland Eamon Hickey wrote to guests.

Ireland’s flagship event on the diplomatic calendar is the latest to fall victim to the outbreak, which has forced the cancellation of mass business, cultural and sporting events across Europe.

The outbreak has hit economies as people cancel plans to travel and socialise, and taken a heavy toll on Chinese manufacturing which has hit supply chains.

“We have had no option but to cancel,” wrote the Ambassador Michael Gaffey of the Permanent Mission of Ireland to the United Nations in Geneva.

“I would hope that we will be in a position to re-organise the event in a few months, but obviously this will depend on the evolution of the situation.”

The cancellation notice by the Irish Embassy to France said the St Patrick’s Day reception was being called off due to “current circumstances”, without specifying the disease.

Minister for Finance Paschal Donohoe had been due to visit Paris for St Patrick’s Day events. He is one of nine members of Government due to be dispatched across Europe and the United States for the occasion.

The Department of Foreign Affairs did not give a figure on how many St Patrick’s Day events would be cancelled, but said decisions would be taken on a case by case basis.

“St Patrick’s Day receptions cancelled are local decisions made by the Embassy in consultation with local authorities and local Irish communities,” a spokesman said.

The Government has said there are no plans as yet to cancel St Patrick’s Day events in Ireland. However, organisers of St Patrick’s Day parades in the Co Cork towns of Youghal, Cobh and Midleton have announced they will cancel their event this year.

Meanwhile, efforts are continuing across the State to curb the spread of the coronavirus following news that the number of confirmed Irish cases had risen to 18.

Five new cases of the virus were confirmed on Friday – three in the south of the county, one in the east and one in the west.

The State’s chief medical officer Dr Tony Holohan described 18 as “a small number of cases” and pointed out that the origins of all but one could be explained.

“We are still in a containment phase and the chance of picking up this disease remains very low.”

More than 102,100 people worldwide have now been infected with the virus and nearly 3,500 people have died. The disease has been detected in 89 countries with China, Iran, Italy, South Korea and Japan the worst affected areas. Germany, France, Spain and the United States have also see their number of positive cases rise rapidly in recent days.

It’s expected staff at some Irish hospitals will be trained to provide testing facilities regionally with the National Virus Reference Laboratory in University College Dublin currently processing all tests.

The National Maternity Hospital on Dublin’s Holles Street said it had applied visitor restrictions due to concerns about the potential spread of the virus.

“The only visiting permitted is the birth partner of the pregnant woman or mother attending (no childen) & the parents of a baby in NICU unless exceptional circumstances,” the hospital said in Twitter post on Saturday.

Hospitals in Cork and the midwest, and Dublin’s Mater hospital, where cases are being treated, have also introduced visitor restrictions and many elective surgeries have been cancelled. Private nursing homes across the State have also restricted visiting to minimise risk to “vulnerable” older residents.

Information notices are being distributed to direct provision centres around the country with details of “good respiratory and hygiene practices”, a spokesman for the department of justice has said.

These notices, which are being translated into different languages, are being made available in all accommodation centres which includes emergency beds in B&Bs and hotels.

However, fears have been voiced on Twitter that the cramped, overcrowded conditions of some accommodation centres could result in the virus rapidly spreading among groups of asylum seekers.

Daily risk assessments are also being conducted and “any changing circumstances are responded to effectively”, said the department spokesman. “In accordance with best practice, contingency planning is also in hand to address any issues arising in the centres, should circumstances change”, he added.

Trinity College Dublin, which has one confirmed case among its student body, introduced a ban on Friday evening on any staff or student entering the university for 14 days after returning from a high-risk area. At present, China, Hong Kong, Singapore, South Korea, Iran, Japan and four provinces of northern Italy are designated as high risk by the HSE.

Queen’s University Belfast is also operating as normal after a member of the college community tested positive for the virus earlier this week.

Starbucks announced on Friday that it had stopped accepting reusable cups from customers to prevent the spread of the virus but that it would still honour the promised discount for anyone carrying one. Drinks will be served in paper cups, the company said.

It’s understood a number of Irish-based coffee shops are following suit and refusing to serve drinks in reusable cups.