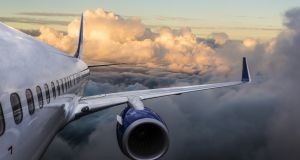 The airport also handled several scheduled passenger and cargo services on Christmas Day including one flight that should have operated through Dublin Airport which was closed on December 25th.

On New Year’s Day a flight from Kuwait to JFK in New York was diverted after a man in his 60s developed chest pains. The flight landed at 2.15pm and the man who had been travelling with medical assistance was pronounced dead. His body was removed to Limerick University Hospital for a postmortem. The flight continued on its way after two hours.

On Saturday, TUI flight TOM-24 was just 30 minutes into its flight from London Gatwick Airport to Bridgetown on the Caribbean island of Barbados when the crew declared an emergency. There were 354 passengers and crew on board.

The Boeing 787-900 Dreamliner jet was about 250km southeast of Cork when the crew declared a MayDay and requested clearance to divert to Shannon. The pilot reported they had an elderly lady on board who was unresponsive.

Cabin crew members had the aircraft’s defibrillator to hand, however, it’s not known whether they needed to use it. Airline staff were assisted by a number of medical professionals who were also on board.

The flight crew told controllers they needed to dump aviation fuel to ensure the jet touched down within safe landing weight limits.

The woman, believed to be in her 70s, was taken to University Hospital Limerick for treatment. The flight continued its journey at 12.51pm.

Saturday’s diversion was the fifth that authorities at Shannon dealt with over the holiday period including four medical emergencies.

On Christmas Eve a 10-year-old girl died on a flight from Toronto to London that diverted to Shannon while on Christmas Day an EL AL flight from Israel to the US was forced to make an unscheduled landing after a woman suffered a suspected miscarriage.

On St Stephen’s Day, an Open Skies flight from New York to Paris diverted to the midwest airport so that passengers could use the toilet facilities. The crew reported that all the jet’s toilets were “unserviceable”.

On Friday, a British Airways flight from Miami to London declared a medical emergency and diverted to Shannon.

Of the estimated 60 flights that made unscheduled landings at Shannon Airport in 2016, nearly half were medical emergencies. The others included diversions for technical, security and weather related issues.

On Christmas Day, Shannon Airport accepted and handled a transit flight that would normally operate through Dublin Airport. However, the capital’s airport doesn’t open on Christmas Day so the Ethiopian flight refuelled at Shannon instead.

On December 23rd, six flights diverted to Shannon because of weather conditions at Dublin and Cork Airports.