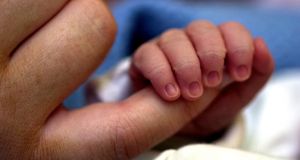 A 2015 Eurostat survey found more than 50% of women in Ireland do not have their first child until in their 30s. Photograph: Eric Luke

Irish women, who are leaving it later than any other nationality in Europe to have children, have been warned that their chances of conceiving lessen as they enter their late 30s.

Dr Simon Fishel, who was part of the team involved in the birth of the world’s first IVF baby in 1978, said women in their mid-30s often experience more complications when pregnant and that the risk of chromosomal disorders is greater for women conceiving at that stage.

He said that Down syndrome occurred at a rate of one in 700 pregnancies among women having children at 32 years of age but that this increased to one in 67 when the woman was 42 years old.

“When a woman gets to 40, probably about 70-80 per cent of her eggs have a chromosomal anomaly. We have 33 pairs of chromosomes and if you take one of those chromosomes, chromosome 21 and we get an extra copy of that – it gives us Down syndrome for example,” said Dr Fishel, who works at the Beacon Care Fertility IVF clinic in Dublin.

“Once a woman gets into her mid to late 30s, her efficiency at conception changes dramatically so the chance of conceiving decreases and the reason for that is what we call chromosome problems in the egg. We know that a woman who is in her 30s probably has about 40 per cent of her eggs having a chromosomal anomaly.”

Dr Fishel acknowledged that “modern society is so hard for women because they have all these pressures; financial, career, owning a home”.

“However one thing we can’t handle or change is our biological clock,” he said. “Even if a woman has IVF, you can’t change the biological clock. The danger still exists, which is one reason why we advocate women, who know for whatever reason that they can’t have children until their late 30s, consider having their eggs frozen.

“If a woman decides to wait until 33 or 34 but then finds there is a problem between you and your partner conceiving, that is an issue because you have to wait another year or two to see what treatment you can get and all of this might not be successful. Once you get beyond 35, every few months is important. All of this adds time on to something you thought would be easy.”

Dr Fishel said the slowing down of Ireland’s birth rate would become a social issue.

“It is a double whammy in society. We need to have 2.6 [children per woman] as a replacement but we have 1.9 in the west and that is far too low and that is going to create a real social issue especially when there is an ageing population. It is going to become a crisis if we don’t address it.”