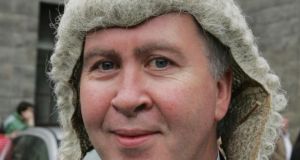 Mr Justice Colm Mac Eochaidh has been selected for appointment as a judge of the General Court of the European Union. Photograph: Cyril Byrne

A High Court judge who is a former Fine Gael general election candidate has been nominated by the Government to a new position in the European judiciary.

Mr Justice Colm Mac Eochaidh has been selected for appointment as a judge of the General Court of the European Union.

The appointment was announced on the Government website this weekend after being approved at the last Cabinet meeting of the year, held just before Christmas. The salary for the position is understood to be €260,000 per annum.

An early campaigner against planning corruption, he and fellow campaigner Michael Smith placed an advertisement in The Irish Times in 1995, offering a €10,000 reward to any person who could produce evidence of corruption in the planning process.

That initiative resulted in several individuals coming forward with serious allegations. It triggered a process that culminated with the long-running tribunal into planning and corruption.

Mr Justice Mac Eochaidh was appointed to the High Court in 2012 by the Fine Gael-Labour coalition.

He was an unsuccessful candidate for Fine Gael in the general election of 2002, standing in Dublin South-East alongside sitting TD Frances Fitzgerald. He also indicated an interest in seeking the nomination to be the Fine Gael candidate in the 2004 European elections in the Dublin constituency. However, the party chose the sitting TD Gay Mitchell, who won a seat.

The Independent Alliance leader and Minister for Transport Shane Ross has made the independence of the judicial appointments process a central issue since joining Government.

New legislation will be introduced to that effect in 2017. It is understood Mr Ross raised no objection to the appointment of Mr Justice Mac Eochaidh but has reiterated the need to introduce the Bill as quickly as possible.

A fluent Irish speaker, Mr Justice Mac Eochaidh is a past pupil of Coláiste Eoin, and studied law at UCD and at the King’s Inns.

As a judge, his most recent high-profile case were proceedings brought by businessman Denis O’Brien to obtain an order that PR company Red Flag Consulting disclose the identity of a client.

A dossier which came into Mr O’Brien’s possession had been prepared by Red Flag and had contained information about him. He sought the order so that the identity of the Red Flag client who had commissioned the dossier be revealed.

The proceedings were part of a wider case being taken by the businessman, who has a controlling interest in Independent News and Media.

In his judgment delivered last month, Mr Justice Mac Eochaidh said Mr O’Brien had failed to show that knowing the client’s identity was relevant and necessary for his case and, as a matter of probability, would advance his plea that Red Flag’s “predominant motive” in compiling the dossier was to harm him.

The new judicial position is a new one in an expanded General Court.

Before the appointment is made, Mr Justice Mac Eochaidh will be assessed by a panel representing the EU. A second Irish judge, Mr Justice Anthony Collins, is already a member of the court.