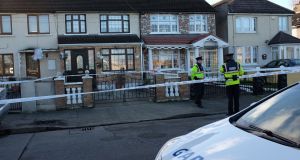 Gardaí at the scene of the stabbing in west Dublin in which a pensioner was critically injured. Photograph: Dara MacDonaill

A pensioner was in a critical condition in hospital on Sunday night after being stabbed a number of times on her doorstep on New Year’s Day.

Bridie Smith (72) was attacked at her home on Oranmore Road in Ballyfermot at about 9.30am.

Gardaí were on Sunday night trying to establish a motive for the attack, which they are currently treating as an assault causing harm.

No arrests have been made in connection with the incident, and it remained unclear on Sunday night if the assault was carried out by a lone attacker or a group. Locals said a number of men were seen running from the scene.

Local man Aidan Moans said that, although an incident of this nature involving a pensioner was particularly serious, stabbings and shootings had become “commonplace” in the area.

In 2015, an elderly woman was attacked in the area when she was on her way home from church. A number of people appeared in court in connection with that incident and one was convicted.

The terraced house where Mrs Smith lives was sealed off on Sunday while a Garda forensic team carried out a technical examination. Other members of the force were making house-to-house enquiries to piece together what had happened. Some of her relatives gathered outside the house on Sunday afternoon.

“Everyone’s going to be shocked, it’s very sad,” said a local woman, who added that she did not hear any commotion around the time of the attack.

Mrs Smith is believed to have lived in the house for over 30 years, and has a number of children. She was described by locals as a quiet woman who “kept herself to herself”.