Attorney general ‘should have lead role’ in appointing judges 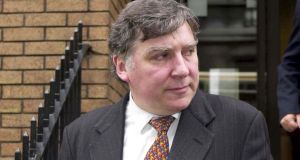 The attorney general in 1986 believed the appointment of judges should “in the first instance” be a matter for his office, according to a file from the National Archives.

In a letter to then taoiseach Garret FitzGerald in November, then AG John Rogers said he was convinced it was “more appropriate for matters of judicial selection to be assigned in the first instance to the attorney general rather than the minister for justice.

“The attorney general is more in touch with the professions and with the courts and is better able to identify persons who have qualities appropriate to holding judicial office,” he said.

“Perhaps, more importantly, the attorney is in a position by inquiry or otherwise, to establish whether a candidate for the bench has traits of character that render him or her entirely unsuitable for judicial office.”

He said then minister for justice Alan Dukes, appointed in February 1986, had told him he did not “have much knowledge of legal gentlemen”, and would be guided by the AG on upcoming appointments.

He said Michael Noonan, Dukes’s predecessor, took the approach that the naming of candidates was “very much a matter for him”.

He said if consulted about a candidate the government or minister had in mind, it was difficult to object unless the candidate was “clearly unsuitable”.

“Although I have tried to resist automatic acquiescence, I must admit that the collegiate nature of this Government has made it a difficult factor to resist,” he said.

Rogers said the process “put the cart before the horse”, and it would be better to assess which candidates were suitable among those who had applied, “leaving the government to choose from among those deemed to be suitable”.

He suggested a small body could be established to assess the suitability of candidates, to include the chief justice, presidents of the courts and Law Society and Bar Council representatives. But, he said, apart from that body, he was convinced matters should first be assigned to the AG.

Rogers forwarded his letter to then chief justice Thomas Finlay. There was no response from the taoiseach or the chief justice on file. The Judicial Appointments Advisory Board was established in 1995.