Fear about high rate of HIV positive prisoners in 1980s 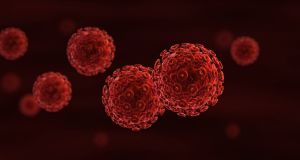 HIV virus: the memo from then minister for justice Michael Noonan notes that seminars had been given to prison staff and prisoners to educate them about HIV/Aids, but communication indicates the level of fear around HIV/Aids in the 1980s

Prisoners who diagnosed as HIV positive posed “a difficult problem” for the prison service, minister for justice Michael Noonan told the government.

In a memo for government in January 1986 from the Department of the Taoiseach’s files, Mr Noonan said that at any one time there could be as many as 250 prisoners in the system considered to be in “high risk” categories, including intravenous drug abusers and “known homosexuals”.

The memo notes that a number of seminars had been given to prison staff and prisoners to educate them about HIV/Aids, but communication indicates the level of fear around HIV/Aids in the 1980s.

On the attitudes of prisoners and staff, the minister said: “Because of the numbers who have already been diagnosed as antibody positive or who may be so diagnosed in the near future, the medical issues which arise and the reaction of both staff and prisoners, the management of these prisoners poses a difficult problem for the prison service.

“This development is all the more unwelcome at a time when the overall prison population is running at a level some 50 per cent higher than three years ago.”

Mr Noonan said that although the medical advice indicated that Aids could only be transmitted in very particular circumstances “the presence of prisoners with Aids antibodies [as it was then known as] would obviously cause unease among the general prison population, particularly in view of the type of sensational publicity which Aids receives virtually every day”.

“There is no reason to believe that among a volatile prisoner population the rational arguments which would suggest a lack of real danger to their well-being would prevail.”

The memo added that prison staff too were concerned “about being in regular contact with offenders who have Aids antibodies”.

The minister was also considering options for segregating such prisoners from the general prison population.