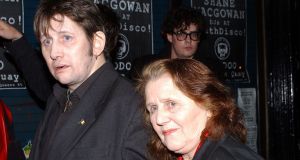 The mother of singer Shane MacGowan has become the first person to lose their life on the State’s roads in 2017.

Therese MacGowan (87) died when the car in which she was travelling struck a wall at Ballintoher, near Nenagh in Co Tipperary, at about 3pm on Sunday.

Ms MacGowan was pronounced dead at the scene and her remains were removed to Limerick University Hospital.

Ms MacGowan lived in Silvermines, Co Tipperary with her husband Maurice, who is from Dublin.

The stretch of road where the crash occurred is less than 10km from the family home. The road remained closed on Sunday night to facilitate a Garda forensic collision examination. Local diversions were in place.

Investigating gardaí are appealing for anyone with information to contact Nenagh Garda station on 067-50450, the Garda Confidential Line 1800 666 111 or any Garda station.

The fatal crash was the first of the year and comes as the numbers of those losing their lives on the State’s roads is increasing after years in decline.

The numbers of such deaths last year was up 15 per cent on the previous year, after what the Road Safety Authority (RSA) said was a “very bad year” for road safety. Provisional figures for road deaths in 2016 put the number of fatalities at 187, up from 162 road deaths in 2015.

The highest numbers of fatalities were recorded in counties Cork and Dublin with 21 each, followed by Limerick with 16.

The RSA previously raised concerns about road safety statistics in Cork when releasing its mid-year figures during the summer.

July was the deadliest month for road users, with 21 fatalities recorded against a monthly average of 16 for 2016.

Coronavirus: One person has died, as 21 cases diagnosed 17:59
‘Drug craze’: Use of laughing gas by under-18s should be banned – FG TD 17:37
Second ever woman elected to chair of Bar Council 17:16
Garda Commissioner disputes claim of journalistic privilege 17:02
Face masks: All you need to know about where, when and why you need one 16:29