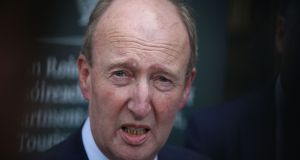 The decision to cancel the St Patrick’s Day festival is a matter for public health officials, not politicians, Minister for Transport, Tourism and Sport Shane Ross has said.

Speaking ahead of a meeting of a new Cabinet sub-committee on the coronavirus outbreak this morning, Mr Ross said that calling off next week’s festival was “a very, very big decision”.

The acting minister, speaking to The Irish Times at the reopening of Stepaside Garda Station in south Co Dublin, acknowledged the public health risks but also the potential damage to businesses from calling off a major event.

“It is a decision which I won’t make and the government as a whole won’t make. Politicians won’t make it. It will be a health decision. We will take their advice,” said Mr Ross.

“I can see both sides of the story and I am very glad I don’t have to make that decision because I don’t have the expertise but if the Department of Health say it should not take place, it won’t take place.”

Referring to remarks over the weekend by leading cancer doctor, Professor John Crown, who called for the cancellation of the festival on public health grounds, Mr Ross said that his views that to be respected and the different medical views showed how difficult a decision it was.

“It would be absolutely crazy for us if the chief medical officer said, ‘don’t do it,’ and we did it,” said Mr Ross. “At the end of the day, we have got to take their best advice and if they say go ahead which is what they are saying at the moment and if before St Patrick’s Day, they say ‘no, it has got to the stage where we think it should be canceled’, it will be cancelled. It is as simple as that.