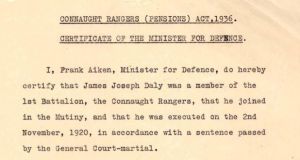 A certificate dated January 8th 1937, signed by Frank Aiken, minister for defence, granting a dependents’ allowance to James Daly in respect of his son James Joseph Daly executed in India on November 2nd 1920 for his part in the Connaught Rangers Mutiny.

Relatives of those involved in the Connaught Rangers mutiny 100 years ago have been told that they will have to petition Queen Elizabeth II to have them pardoned.

Approximately 500 men in two companies of the 1st battalion of the Connaught Rangers based in northern India refused to soldier in protest at the behaviour of British forces in Ireland during the War of Independence.

Two of their number, privates Patrick Smythe and Peter Sears, were shot dead when they attempted to raid the armoury at the barracks in Solon on July 1st, 1920. The instigator of the raid, Private James Daly from Tyrrellspass, Co Westmeath, was the only one executed for his role in the mutiny.

One of them was Private William Coote from Dublin who joined the Connaught Rangers when he was 16 in 1906.

Originally from Dublin, he served twice in France in the first World War. A day after being demobbed in 1919, he rejoined his regiment and was shipped to India.

He received a year’s hard labour and was discharged in ignomy in 1921. The three first World War medals he received in 1920 were taken from him by the Ministry of Defence (MOD) in the UK and destroyed.

Mr Coote, who died in 1973 at the age of 83, has five children and 34 grandchildren. Members of his family have petitioned the MOD to have his medals restored and for him to be granted a pardon.

MOD official retired Lieutenant Colonel Kestrel Simson responded by stating that Coote had no opportunity to re-enlist after being dismissed. “As a consequence, his medals would have been destroyed and can never been restored,” he said.

He also ruled out the possibility of an individual pardon for Coote as it was not possible to pardon one mutineer and not the others.

“This could only be achieved by a royal prerogative of mercy – sometimes referred to as a royal pardon,” he wrote.

“The MOD cannot provide a royal pardon – these can only be issued by the Sovereign and therefore if you wish to pursue a royal pardon, you will need to petition the Queen.”

His grandson Seamus O’Kelly said the centenary of the Connaught Rangers mutiny was a “good time for a goodwill gesture from the British government” especially after the recent visit of the Duke and Duchess of Cambridge.

Mr O’Kelly, who first raised the issue with RTÉ’s Liveline programme last week, said his grandfather had been proud of his service in the Connaught Rangers, “but ashamed that he was discharged as he was” in 1921.

Mr Coote later joined the National Army in the Civil War and got a job subsequently in the Botanic Gardens.

He was one of the oldest surviving mutineers and only one of five left alive when the remains of Daly, Sears and Smythe were repatriated to Ireland on the 50th anniversary of the mutiny in 1970.

“It was always a bugbear with us when he did so much with the Connaught Rangers,” said Mr O’Kelly who emigrated to Lincolnshire from Dublin when he was eight.

“My grandfather was very loyal. He felt he owed it to this friends by staying with them (the mutineers). It’s important for Irish people to know what they have done. Those men were proud of what they did for Ireland.

“They suffered a lot. They were left out in the open in the Indian sunshine for a few days. They couldn’t break their resolve.”

The main national commemoration for the mutiny will take place in Tubbercurry, Co Sligo on June 27th, a century to the day after the mutiny started.

The event will feature a commemoration ceremony and the unveiling of a memorial by President Michael D Higgins in the town where several of the mutineers were from.

Committee secretary Mary Henry said: “The project is designed to tell the story and honour the memory of the courageous men who while far from home stood in solidarity with their native country men fighting for our independence. “This will be the first occasion where all the families and descendants will have an opportunity to come together and honour the memory of their ancestors.”