SF’s batteries are recharged, but Foster still has some power left

If Stormont is dissolved and an election battle begins, the DUP will meet fire with fire 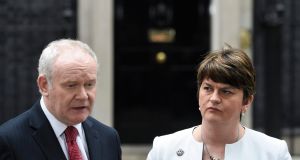 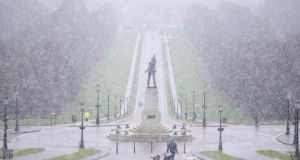 Snow over Stormont: The DUP has 38 of the Assembly’s 108 seats. Sinn Féin has 28. Proportionally, an election could leave both with 32 and 22 respectively in the new 90-seat chamber. Photograph: Jonathan Porter/Press Eye

The frailty of Martin McGuinness at Stormont on Monday when he announced his resignation as deputy first minister is in striking contrast to the energy shown by revitalised Sinn Féin politicians and senior officials.

The Sinn Féin battery is recharged. During the week, the great hall of Parliament Buildings in Stormont was filled with politicians of all hues, their advisors and foot soldiers, along with the press capturing the high theatre.

DUP, Ulster Unionist, SDLP and Alliance personnel, trying to get a grip on a rapidly moving situation that threatens the existence of Northern Ireland’s Assembly, looked uncertain.

But the Sinn Féiners, some from Northern Ireland but many more “up from Dublin” accompanying Gerry Adams, were buzzing. One senior figure wore the broadest of smiles.

For months he and his colleagues had taken gyp from the grassroots complaining about the party being lorded over by Arlene Foster and the DUP. They were particularly tired of the SDLP deploring “roll-over republicanism” and the “timidity” of Sinn Féin over the cash for ash crisis, the Irish language, the past and a range of other issues.

Now it was the time to strike back.

“Arlene Foster has been rubbing our noses in it for months and she is not going to get away with it any more,” he said, adding some very disparaging comments about the then outgoing first minister.

“This is the best thing ever – our grassroots are energised by Martin’s resignation,” he averred.

What did he care about?

“Well, we can put greater focus down South, we can work on our all-Ireland project.”

His comments reflect SF’s confidence, but also how much Arlene Foster and the DUP decidedly have been rocked back on their heels, much of it through a failure to heed legitimate Sinn Féin concerns.

There is still until 5pm on Monday for a way out of this crisis. Nobody is totally ruling out some magician’s rabbit being found. Right now, however, Stormont’s dissolution and elections appear inevitable.

For now, it is all about positioning. The earliest NI secretary James Brokenshire can set a polling date is 43 days from Monday, leaving a six-week election campaign, or more, and plenty of time for even greater political polarisation.

The week gave a foretaste of how “brutal”, as Foster predicted, it will be, especially during TV and radio battles between DUP Minister for Communities Paul Givan and Sinn Féin’s Minister for Finance, Máirtín Ó Muilleoir.

Givan was an unusual choice given that he was the Minister who took away Líofa’s Irish language promotion bursary of £50,000 – although, under some internal DUP pressure it is claimed, he restored that grant on Thursday.

It was like putting up a pantomime figure for republicans and nationalists to boo and hiss, and to invigorate them even more for the election door-to-door footslog.

And if “post-truth” means repeating an allegation so often that, regardless of its veracity, the public will be emotionally primed to believe it, then Ó Muilleoir is a master of this phenomenon.

But the fact is nobody has proved corruption so far. Certainly there is evidence of civil service and political incompetence that cost controls were not imposed on the hugely overgenerous subsidy to encourage the use of biomass boilers. However, it was not until later in the week that veteran interviewers reminded Ó Muilleoir that corruption was unproven.

Up to now a spooked DUP has been unable to resist SF’s carefully marshalled onslaught. It argues that Martin McGuinness did not stand aside as deputy first minister when the PSNI chief constable said that the Provisional IRA killed Kevin McGuigan in 2015, and that former regional development minister Conor Murphy did not stand aside when a tribunal found his department had discriminated against a Protestant who failed to get a top job in NI Water.

These were reasonable counterarguments, but they do not seem to be finding much traction with the public, and it is the public who will decide which 90 Assembly members will be elected if the election goes ahead.

Currently, the DUP has 38 of the Assembly’s 108 seats. Sinn Féin has 28. Proportionally, based on the figures from last May’s election, an election could leave both with 32 and 22 respectively in the new 90-seat chamber.

The money still is on the DUP being the largest party afterwards, but it is not absolutely guaranteed. If the continuous “DUP corruption” refrain makes a real impact, some unionists could shift allegiance to the Ulster Unionist Party.

They see the hand of Gerry Adams in the ultimatum demanding that she stand down as first minister during an inquiry – a diktat she felt she had no choice but to refuse.

Moreover, a protracted period of suspension of direct rule, with some Dublin input, may help Sinn Féin’s grander ambitions, but it will not assist community relations. The upheaval threatens a stability that is both needed and deserved.

During a fraught week, there was, nevertheless, gallows humour. Wrapping up a a meeting on Thursday of the NI Assembly’s Justice Committee, the DUP chairman, MLA Paul Frew, said: “I advise members that the next meeting of the committee is scheduled to take place on Thursday 19th January – 2025.” He added that he was “only joking”.