Society photographer never adjusted to life in the royal limelight, divorced after 18 years 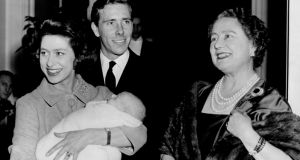 Lord Snowdon with his then wife, Princess Margaret, who holds their newborn son Linley, and the Queen Mother on December 1st, 1961. Photograph: AFP/Getty Images

“The queen has been informed,” a palace spokeswoman said.

A family spokesman said Lord Snowdon, who was born Antony Armstrong-Jones, had died peacefully at home.

Lord Snowdon had a long and successful career as a society photographer and married Margaret at Westminster Abbey in 1960. They had two children, but he had difficulty in adjusting from his previous bohemian lifestyle to the restrictions of public life.

The couple divorced in a glare of publicity in 1978, the first such royal split since the days of Henry VIII four centuries earlier.

He remained on good terms with his former wife and royal in-laws, taking many photographs for Buckingham Palace, but friends said he became a much happier man with the freedom to go where he pleased and say what he thought.

Of his talents behind the lens, Lord Snowdon once said: “One only became a photographer because one drew badly.”