Seven people dead in crashes on Irish roads over weekend 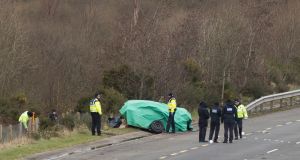 Gardaí at the scene of the crash on the N1 at Carrickarnan, Co Louth. Photograph: Arthur Carron.

The girl, who was a passenger, was fatally injured in the crash which occurred at about 1.15am Sunday morning in Porridgetown, Oughterard. Her body has been removed to the Mortuary in University Hospital Galway where a postmortem will take place.

The driver of the car, a 21-year-old man was uninjured. Gardaí are appealing to any road users who may have travelled the road and can assist them or drivers who may have dash cam to contact them in Salthill Garda station on 091 - 514720, the Garda Confidential Line 1800 666 111 or any Garda station.

Three people died following a two-car crash in the early hours of Saturday near Dundalk, Co Louth. The crash occurred at about 2.15am on the N1 at Carrickarnan, south of Junction 20 on the main Dublin to Belfast road.

The occupants of one car, a man (50s) and woman (80s) were pronounced dead at the scene.

A man in his 20s, travelling in the second car, was taken to Our Lady of Lourdes Hospital in Drogheda. His injuries are not thought to be life threatening. A second male in the car (20s) was pronounced dead at the scene.

The remains of the deceased have been removed to Our Lady of Lourdes Hospital and postmortems are expected to take place on Sunday.

Gardaí have appealed for people who were on the road between 2am and 2.30am to contact Dundalk Garda station.

Gardaí are investigating a possible connection between one of the cars and another incident in Dundalk earlier in the night.

A male pedestrian in his 20s died following a crash involving a lorry at about 11.15am Saturday morning in Monaghan.The pedestrian had been taken to Tallaght University Hospital after the crash. The lorry driver was uninjured.

The crash happened on the N54 between Monaghan town and Clones in the townland of Bandrum. Gardaí are appealing for witnesses to that incident to contact them at Monaghan Garda Station on 04777240, the Garda Confidential Line or any Garda Station.

On Friday night, the driver and passenger of a car travelling in Co Cavan were killed in a road crash.

Both of the vehicle’s occupants were aged in their 60s. They were pronounced dead at the scene of the collision in Ballinagh shortly after emergency services arrived.

It occurred at about 7pm when their car collided with an jeep on the N55 road. The deceased were a male driver and a female passenger. Gardaí said the male driver of the jeep was taken to Cavan General Hospital as a precaution.

Sunday’s death brings to 29 the number of road fatalities so far this year.